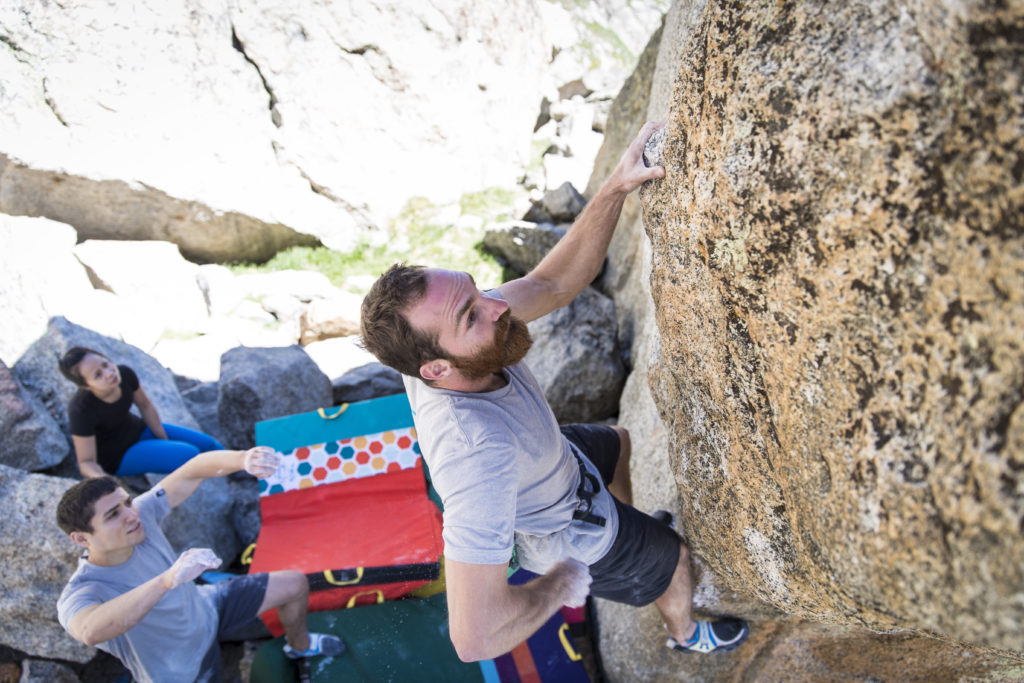 We have entered a time in climbing history where not only does the average rock climber learn to climb inside a state-of-the-art indoor climbing facility, but they rarely, if ever, experience the act of climbing on real rock.

In fact, the indoor and outdoor climbing worlds have digressed so much that many outdoor climbers argue that the style of indoor climbing has altered enough to be an entirely different sport. When the gym rats finally do experience the great outdoors there is no longer a natural mentorship between experienced and inexperienced climbers. The consistent outdoor climbers tend to stick in packs, as do the indoor groups. Because of this, there seems to be a large gap occurring between these groups when it comes to an understanding of the unspoken outdoor bouldering rules.

Talking with long time professional outdoor climber, Paul Robinson, he says “When I was growing up, climbing was a much smaller sport than it is today. If you climbed in the gym, you also climbed outside.  I was first taken outside by one of the guys who owned the local gym that I went to.  From that point on, I was hooked.  I made it my goal to learn as much as i could from my mentors and those who frequented the outdoors.  In the late 90’s and early 2000’s it was easy to see if someone was not doing something properly. Now though, there are just too many people to make sure everyone is learned on their outdoor etiquette.” 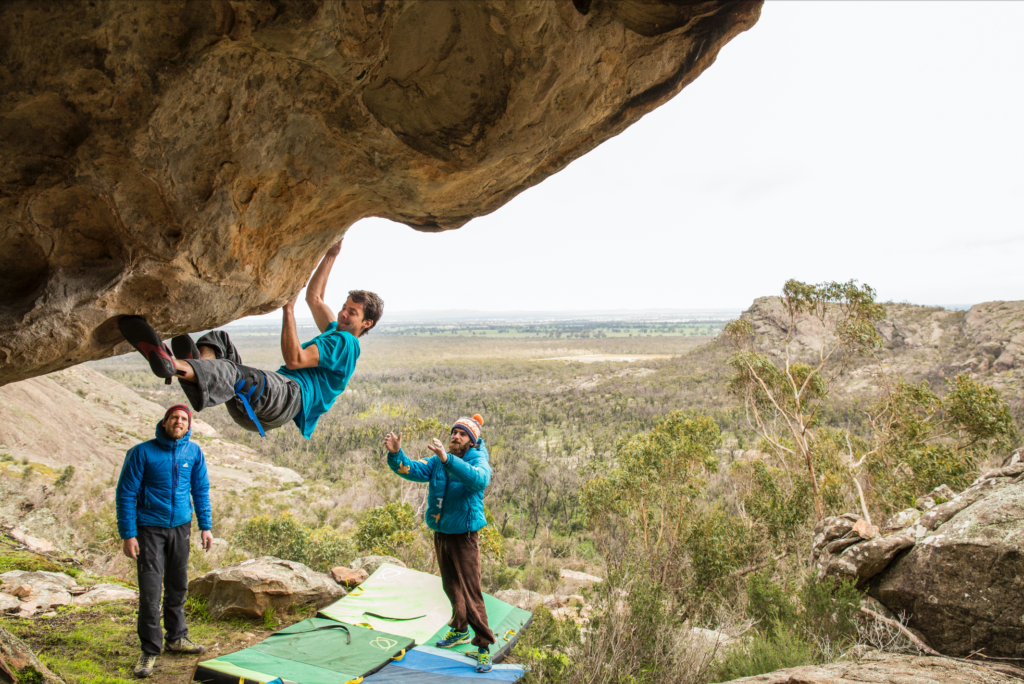 So what exactly is outdoor etiquette? I carefully observed a variety of scenarios in my home crag of Rocky Mountain National Park throughout the summer- the season when the most out-of-town climbers come to visit and the most indoor climbers finally venture outdoors- and here is what I came up with.


Rule 1: Brushing and chalking. Outdoor climbing is condition dependent and the rock is very much affected by the sweat emanating from a hot palm. It is the socially acceptable thing to always chalk before pulling on a boulder and to brush any greasy holds before your attempt. It is unacceptable to witness a climber brush all the holds and then proceed to get on the climb yourself right after- unless of course you follow your turn with the same dedicated brushing- but still… I asked Paul how he went about preparing a boulder for a first ascent, “I always will rappel into a climb to make sure it is safe/possible to climb.  I try to only use a brush to clean the holds, but if necessary, other tools may be needed to clean off lichen, choss, etc. to make the climb possible. [You should not] break a hold that could not break under your own body weight.”

Rule 2: Spotting and moving pads. We are outside – the ground is uneven, hard and often dangerous. If you are with a group of climbers and notice the climber on the wall is no longer above the pads, you move the pads for them in case they fall, spot the climber for the same reason. Outdoor bouldering is much more of a group activity than indoor bouldering, you need to be alert and help others in need.

Rule 3: Topping out. Thanks to the typical indoor bouldering walls, there has not been an education in the art and fear of topping out, and yet, in certain climbing areas the top out is the hardest part of the boulder. When it comes to outdoor bouldering, you have not completed the climb unless you can stand on the top- exceptions include if the boulder is in a cliff band and top out is impossible. The first initial ascent did not top out on Evilution in Bishop for example. You also need to finish the top in the same area as the first ascentionist- meaning don’t bail out left and crawl around the corner to down climb or step off when the clear path remains upwards.

Rule 4: Tick marks. These are created to indicate to a climber exactly where the hold is if it is difficult to see it. Sometimes people tick a hold just to point it out (such as a small foot smear), sometimes it’s to indicate to reach around something to find the hold, and sometimes it’s specific enough to indicate exactly where your fingers need to go in order to grab the hold. Often times the smaller foot ticks are not erased on popular, harder boulders where many people are trying; however, large and hand-specific ticks should be brushed off at the end of the session to keep the boulder cleaner for the next climber who tries- you don’t know where they will want to tick and what holds they use in which way. People around the world have different opinions of tick marks, where to put them, how big they can be, how rigorously they must be cleaned off, etc.

So when it doubt, scrub it out!

Rule 5: Taking turns and respecting who was there first. It’s not uncommon for a seasoned veteran to approach a boulder where there is another climber and literally ask “do you mind if I try this with you?” The climber who has approached the boulder is clearly interrupting the other climber’s session and while no one owns the rock, it’s still the courteous thing to do considering you will be shortening their session and depending on the problem, sometimes altering the condition of the holds. Once permission is granted, there is an unspoken agreement that turns will be taken. If one climber seems to not be going for some time, the climber who just went should ask “mind if I try again while you rest?”  While this is not as much of a rule as the others, it never hurts to be polite, you can often get better beta, and sometimes you can even make a new friend.

Rule 6: Clean Your Shoes. Make sure your climbing shoes are clean before hoping onto any problem. This helps keep the holds from getting dirt and debris into them. When you step onto a hold with dirty shoes you have the potential to wear down and/or polish the rock from the movement you make with your shoes on the holds & jibs. By also cleaning your shoes before each climb you also help keep holds dry reducing the amount of chalk and brushing needed through out your bouldering session.

Rule 7: Leave No Trace. The phrase explains it all, and yet there is an entire movement because it seems to lack resonance in the minds of so many who venture outside. Always leave the environment as clean as it was when you arrived, and if you arrive to find trash, pack it out and dispose of it properly. This also includes staying on established trails, or if you create a trail in a new zone(If there is a local coalition check with them first), mark the trail so there is one common path and environmental impact is decreased. 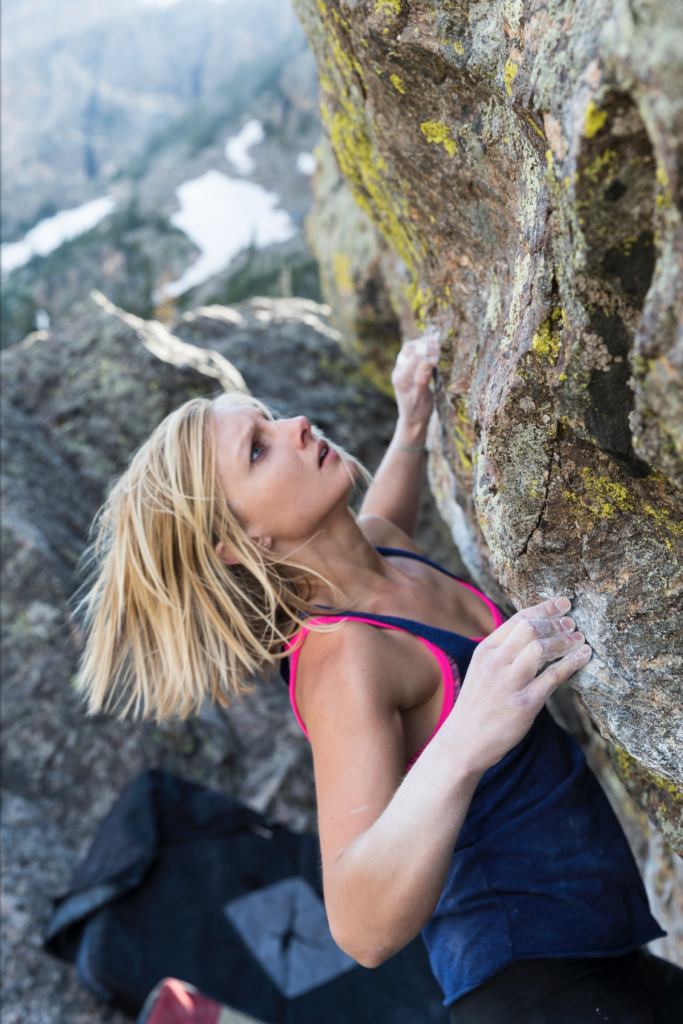 Upon speaking with my friend Rachel who is a long time outdoor climber, I wondered how she came about knowing these unspoken rules to begin with, “I learned these rules through first hand experience and word of mouth over my 10 years of climbing. Though honestly, most of these rules are common sense and I ‘learned’ them without realizing it. Only in the past couple of years have I become aware of how some of these rules are not so much rules, but are more principles to live by in the realm of bouldering and climbing in general.” While these rules might be common sense for some, they are certainly not common sense for others- thus the purpose of this article 🙂

One rule that once applied mostly to those putting up first ascents but is now becoming more of a general problem is “chipping.” Chipping exists when you manufacture holds that were not previously there, changing holds, or breaking holds either for your own benefit, or to harm another’s ability to complete the climb. Not all types of rock are meant to be climbed, and even the best quality rock will provide millions of un-climbable boulders- ask any of the main guys traveling to put up first ascents.

Unfortunately, there are climbers around the world that lack ethics when it comes to outdoor climbing. They would prefer to chip a climb to create a first ascent, chip a climb to make sure their first ascent needs to be climbed in one specific way, or even chip an established climb to make it possible for them to climb, rather than just letting the boulders be. Yes, rocks break and change, but let them do so naturally.

In terms of personal climbing ethics and rules that are not environmentally based, Rachel and Paul both wanted to add some rules to the list

So what if we encounter someone breaking these rules? Paul Robinson tends to take the quiet approach but deal with the aftermath of the rule breaking (cleaning up, brushed ticks, etc.) before he leaves. Rachel, a more outgoing person says, “I’m not one to sit down and be quiet when I see someone breaking a rule that I deem as environmentally important such as leaving your five Clif Bar wrappers near the start of my project. Though in general, I think following the rule or principle myself speaks volumes more than saying anything at all.”

Overall, outdoor climbing is about respect- respect for nature, the rock, the finicky weather, the beauty around them, and the people they are with. It’s not about the work out, what you wear, who you meet, or climbing at the social times- it’s about the passion & joy of the incredible sport and lifestyle of climbing. Rather than the passionate outdoor climbers getting annoyed with the newer, un-knowledgeable ones, it’s our duty to lead by example, to educate where appropriate the future generation of outdoor climbers or climbing locations might be in jeopardy. For those of you gym climbers who have never been outside or don’t go outside often, make an effort to learn, be mindful and respectful of these unspoken rules.

Have a rule, principle or tip that should be added to this? Add your thoughts in the comments section below!

Links to check out: