We all get rained out on occasion. The weather just doesn’t work out in our favor, mother nature decides its now monsoon season. For the next week you are stuck staring at gear, Instagram and google maps seeing if you can make that 6-7 hours drive to the nearest dry crag a feasible “weekend trip”. Here are some climbing books to past the time.
I went through this last fall here in the northeast. Being based in New Jersey, the Gunks is my home crag and it recorded its wettest September on record. As someone who much rather be moving then sitting found myself actually taking up a book or two and of course they were climbing books. Speaking with my climbing buddies, I quickly discovered they too were also reading a few climbing books as well. We didn’t have much of a choice we got socked and were looking for ways to keep the stoke alive.  Here is a list of some climbing books we found ourselves reading: 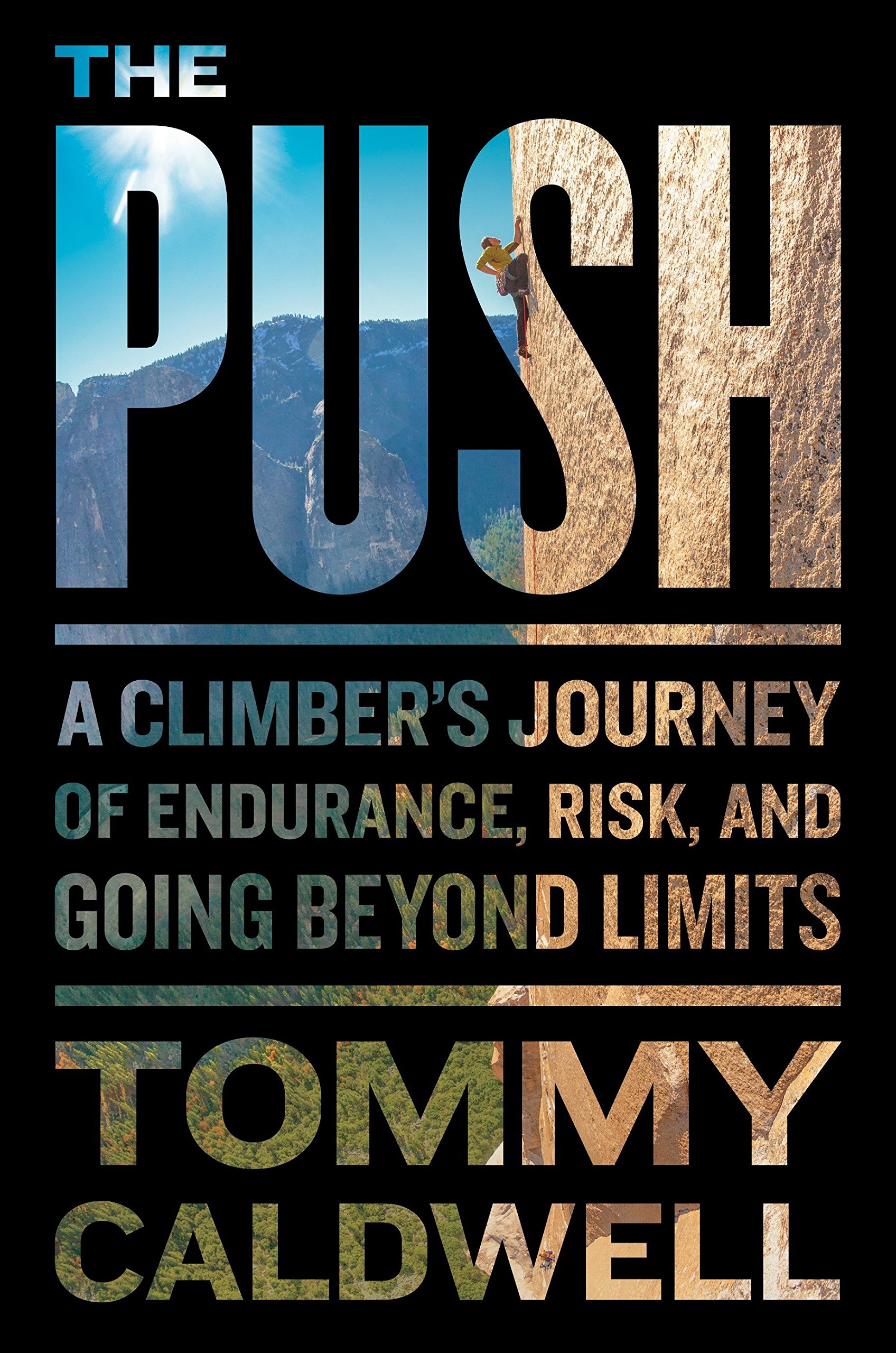 The Push by Tommy Caldwell

“This engrossing memoir chronicles the journey of a boy with a fanatical mountain-guide father who was determined to instill toughness in his son to a teen whose obsessive nature drove him to the top of the sport-climbing circuit. Caldwell’s affinity for adventure then led him to the vertigo-inducing and little understood world of big wall free climbing. But his evolution as a climber was not without challenges; in his early twenties, he was held hostage by militants in a harrowing ordeal in the mountains of Kyrgyzstan. Soon after, he lost his left index finger in an accident. Later his wife, and main climbing partner, left him. Caldwell emerged from these hardships with a renewed sense of purpose and determination. He set his sights on free climbing El Capitan’s biggest, steepest, blankest face—the Dawn Wall. This epic assault took more than seven years, during which time Caldwell redefined the sport, found love again, and became a father.” 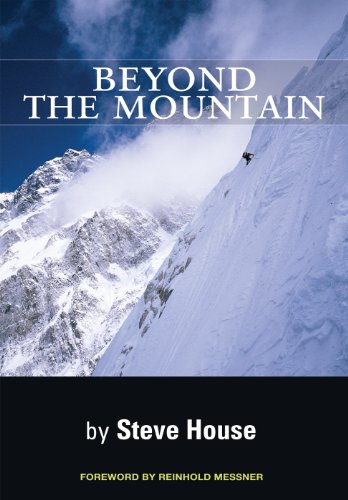 Beyond the Mountain by Steve House

“Steve House built his reputation on ascents throughout the Alps, Canada, Alaska, the Karakoram and the Himalaya that have expanded possibilities of style, speed, and difficulty. In 2005 Steve and alpinist Vince Anderson pioneered a direct new route on the Rupal Face of 26,600-foot Nanga Parbat, which had never before been climbed in alpine style. It was the third ascent of the face and the achievement earned Steve and Vince the first Piolet d”or (Golden Ice Axe) awarded to North Americans.

Steve is an accomplished and spellbinding storyteller in the tradition of Maurice Herzog and Lionel Terray. Beyond the Mountain is a gripping read destined to be a mountain classic. And it addresses many issues common to nonclimbing life — mentorship, trust, failure success, goal setting, heroes, partnership — as well as the mountaineer’s heightened experience of risk and the deaths of friends. Beyond the Mountain is a window into the process of a man working to be the best he can be.”

Alone on the Wall by Alex Honnold

“Alone on the Wall recounts the most astonishing achievements of Honnold’s extraordinary life and career, brimming with lessons on living fearlessly, taking risks, and maintaining focus even in the face of extreme danger. Now Honnold tells, for the first time and in his own words, the story of his 3 hours and 56 minutes on the sheer face of El Cap, which Outside called “the moon landing of free soloing…a generation-defining climb. Bad ass and beyond words…one of the pinnacle sporting moments of all time.” 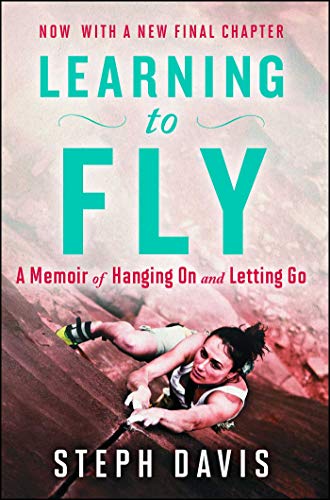 Learning to Fly by Steph Davis

“In the company of only her beloved dog, Fletch, Davis sets off on a search for a new identity and discovers skydiving. Though falling out of an airplane is completely antithetical to the climber’s control she’d practiced for so long, she turns each daring jump into an opportunity to fly, first as a skydiver, then as a base jumper, and finds herself indelibly changed. As she opens herself to falling, she also finds the strength to open herself to love again, even in the wake of heartbreak. And before too long, she fortuitously meets someone who shares her passions.”

The Impossible Climb by Mark Synnott

“Synnott delves into a raggedy culture that emerged decades earlier during Yosemite’s Golden Age, when pioneering climbers like Royal Robbins and Warren Harding invented the sport that Honnold would turn on its ear. Painting an authentic, wry portrait of climbing history and profiling Yosemite heroes and the harlequin tribes of climbers known as the Stonemasters and the Stone Monkeys, Synnott weaves in his own experiences with poignant insight and wit: tensions burst on the mile-high northwest face of Pakistan’s Great Trango Tower; fellow climber Jimmy Chin miraculously persuades an official in the Borneo jungle to allow Honnold’s first foreign expedition, led by Synnott, to continue; armed bandits accost the same trio at the foot of a tower in the Chad desert . . .” 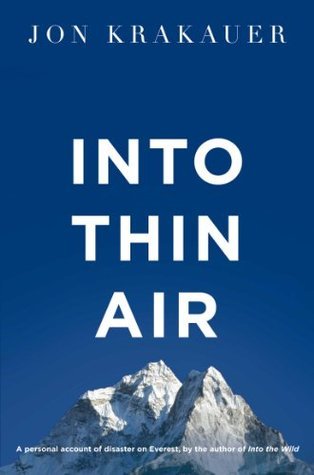 Into Thin Air by Jon Krakauer

“When Jon Krakauer reached the summit of Mt. Everest in the early afternoon of May 10, 1996, he hadn’t slept in fifty-seven hours and was reeling from the brain-altering effects of oxygen depletion. As he turned to begin his long, dangerous descent from 29,028 feet, twenty other climbers were still pushing doggedly toward the top. No one had noticed that the sky had begun to fill with clouds. Six hours later and 3,000 feet lower, in 70-knot winds and blinding snow, Krakauer collapsed in his tent, freezing, hallucinating from exhaustion and hypoxia, but safe. The following morning, he learned that six of his fellow climbers hadn’t made it back to their camp and were desperately struggling for their lives. When the storm finally passed, five of them would be dead, and the sixth so horribly frostbitten that his right hand would have to be amputated.”

Touching the Void by Joe Simpson

“Joe Simpson and his climbing partner, Simon Yates, had just reached the top of a 21,000-foot peak in the Andes when disaster struck. Simpson plunged off the vertical face of an ice ledge, breaking his leg. In the hours that followed, darkness fell and a blizzard raged as Yates tried to lower his friend to safety. Finally, Yates was forced to cut the rope, moments before he would have been pulled to his own death.

The next three days were an impossibly grueling ordeal for both men. Yates, certain that Simpson was dead, returned to base camp consumed with grief and guilt over abandoning him. Miraculously, Simpson had survived the fall, but crippled, starving, and severely frostbitten was trapped in a deep crevasse. Summoning vast reserves of physical and spiritual strength, Simpson crawled over the cliffs and canyons of the Andes, reaching base camp hours before Yates had planned to leave.”

“Psychovertical is the story of what happens to a nice lower-class kid with dyslexia who gains control over his circumstances by clinging to giant stone faces, thousands of feet in the air, for days at a time. In this case, Kirkpatrick uses his 12-day solo climb of the Reticent Wall on California’s El Capitan as the experience that helps him understand how growing up poor and struggling with dyslexia and low self-confidence set him on a path of extreme adventure.”

The Tower by Kelly Cordes

“Patagonia’s Cerro Torre, considered by many the most beautiful peak in the world, draws the finest and most devoted technical alpinists to its climbing challenges. But controversy has swirled around this ice-capped peak since Cesare Maestri claimed first ascent in 1959. Since then a debate has raged, with world-class climbers attempting to retrace his route but finding only contradictions. This chronicle of hubris, heroism, controversies and epic journeys offers a glimpse into the human condition, and why some pursue extreme endeavors that at face value have no worth.”

The Calling by Barry Blanchard

“With heart-pounding descriptions of avalanches and treacherous ascents, Barry Blanchard chronicles his transformation from a poor Native American/white kid from the wrong side of the tracks to one of the most respected alpinists in the world. At thirteen, he learned to rappel when he joined the 1292 Lord Strathcone’s Horse Army Cadets. Soon kicked out for insubordination, he was already hooked on climbing and saw alpinism as a way to make his single mother proud and end his family’s cycle of poverty. He describes early climbs attempted with nothing to guide him but written trail descriptions and the cajones of youth. He slowly acquires the skills, equipment and partners necessary to tackle more and more difficult climbs, farther and farther afield: throughout the Canadian Rockies, into Alaska and the French Alps and on to Everest, Peru, and the challenging mountains in Pakistan. From each he learns lessons that only nature and extreme endeavor can teach. This is the story of the culture of climbing in the days of punk rock, spurred on by the rhythm of adrenaline and the arrogance of youth. It is also a portrait of the power of the mountains to lift us – physically, emotionally, intellectually.”

Kiss or Kill by Mark Twight

“Kiss or Kill: Confessions of a Serial Climber is raw, unfiltered Twight. These author’s cut are the real deal, not the homogenized fluff offered up by magazine editors who are often unwilling to offend. Twight’s words make it clear that climbing is only distantly about the summit. Several of these pieces are new to U.S. readers. Twight edited all of the selections and appended each with a current author’s note; confessing his inspiration, events that followed, and lessons learned (or not learned, some might say). It adds up to a frightfully lucid look into Twight’s personal life as both man and hardcore alpine climber. The dissection scares me sometimes…

Whether railing against the spinelessness of American siege-style mountaineering, admitting addiction to pushing the bounds of the possible, or reveling in his ability to cut away anything in life that holds him back, Twight never blinks. Along the way, there is the drama of new and epic routes, unbreakable bonds between climbing partners, and Twight’s evolution as a climber and a man. He tells every story in a unique, in-your-face style.

Kiss or Kill is not an easy read. It may scare some readers-but that’s the point. “I want this book to help you recognize your own anger, which will help you understand mine”, says Twight. “Somewhere out there somebody understands these words and knows they matter. They were written in blood, learned by heart.”

Time to Climb pays the bills through serving ads and participating in affiliate programs such as Amazon to earn from qualifying purchases. If you enjoy and/or benefit from content on our site please help us by sharing our articles. Thank you for your continued support!