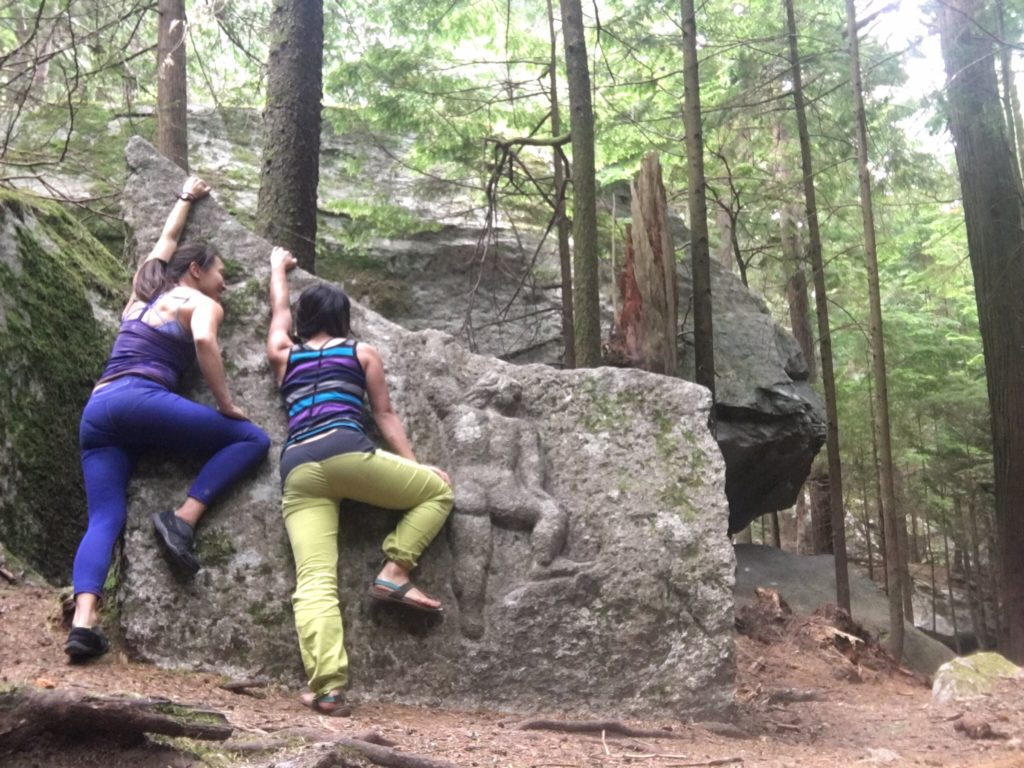 Bonds made while climbing can become as solid as the rock we climb, as brothers & sisters we create these levels of trust that often last a lifetime. Meet the Beta Sisters.

I had a weird childhood.  At the age of 6, I was taken away from my mom by my dad and flown from Taiwan to drop off with strangers (my aunt and uncle) in the foreign country of United States.  From six to ten years old, I lived with them in Washington state until my Dad returned from Taiwan and we moved to New Jersey.   Then somehow my parents remarried each other during my middle school years but then divorced two years later for the second time, which resulted in my dad sending me back to live in Washington for high school.   Follow all that? 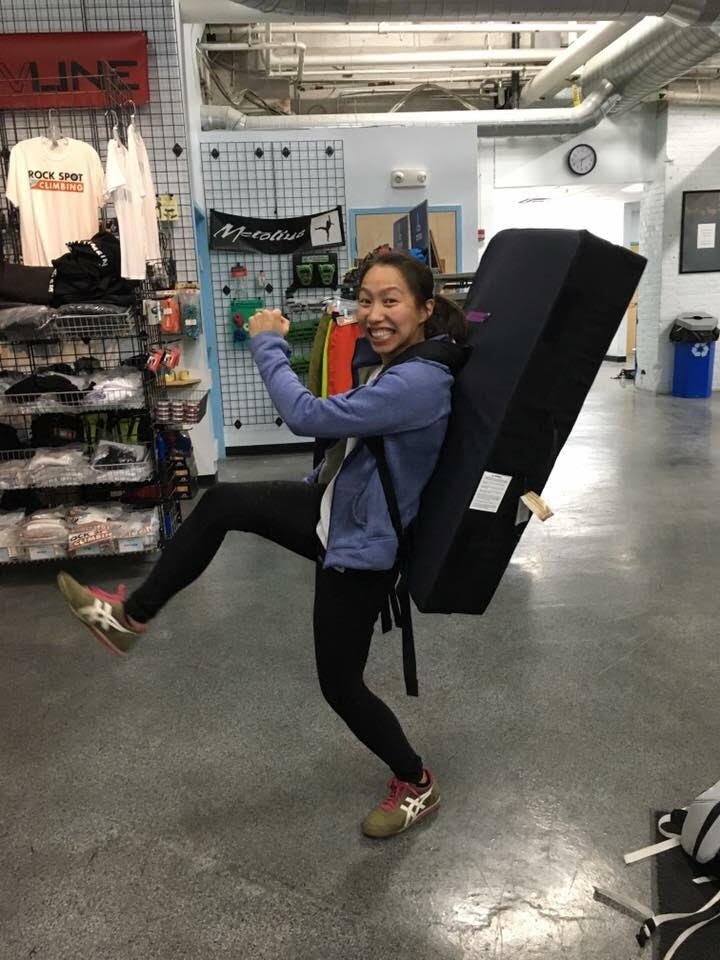 What came out of all this moving around was that I grew up to be an incredibly independent person but also meant I trusted no one in life.  When you grew up believing your primary caretakers don’t want you, you realize there’s only one person who will look out for you- yourself.   I don’t have any siblings either to commiserate so I am always envious of my friends who had a brother or sister they were close to.   Someone to share secrets and go on adventures with, or just someone to complain about our parents to.

This is one of the many reasons why I’m a boulderer and not a sport climber.  My first and only time trying to lead climb, I was absolutely mortified at two things: that I had someone’s life in my hands and they had my life in theirs.  So much trust I couldn’t give away naturally but also I had zero desire to.   It was against my way of life after all.   And the thought of doing a sport in which I had to rely on another person for the enjoyment of it – was completely unappealing to me. 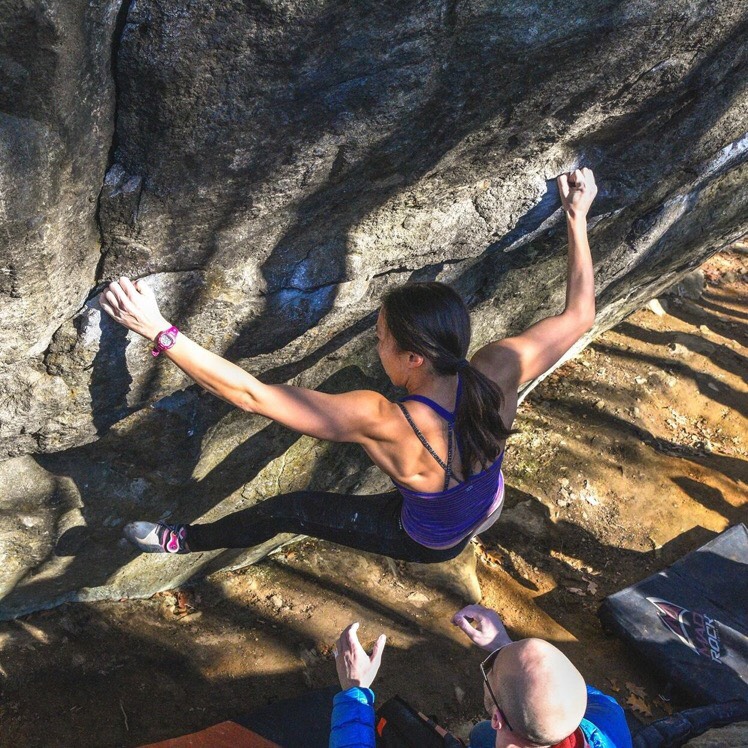 The trust and reliance in that kind of climbing partnership is not something I’ve ever experienced in my life.   Which also meant I was not exactly looking to change that either.  I was going to be a boulderer and that meant I can go to the gym or climb outdoors whenever I want and keep my independence.  Surely a climbing partner would only slow me down or hold me back. 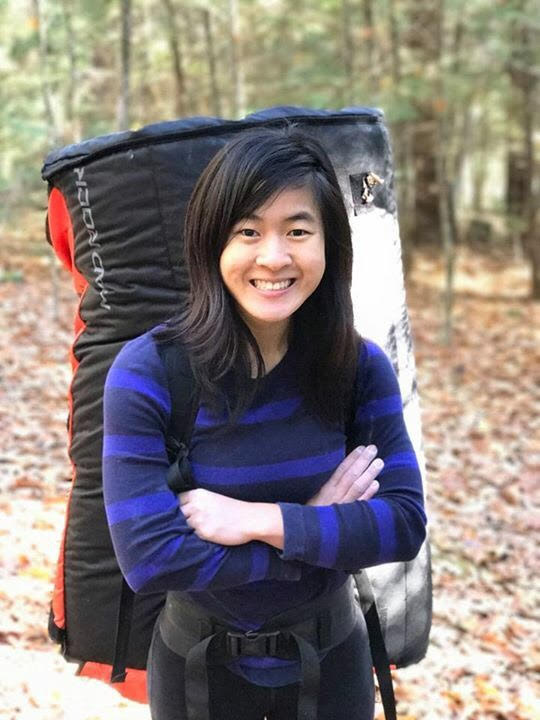 I met Ju (short for Juliann), also another short Taiwanese rock climber, at the climbing gym a year and half ago.  She kept mostly to herself and didn’t socialize with the rest of the climbers so I didn’t know her at all until months later, when somehow I got on a group text chat about a day climbing trip to Pawtuckaway.

At first the talks were just about climbing logistics, but soon our group chat lead to late night conversations about how much we love to poop, who the hottest climbers are at our gym, and our love for Taiwanese food.  Often it would just be me and Ju texting at 2am about our critical Asian parents and our obsession with noodles and bubble tea.   I don’t know if it was because we are both the only child, or because we love Poke Bowls, or because we are both oddly muscular in the same way, but pretty soon Ju and I were chatting and climbing all the time together.  With our similar height and climbing abilities, we called each other Beta Sisters. 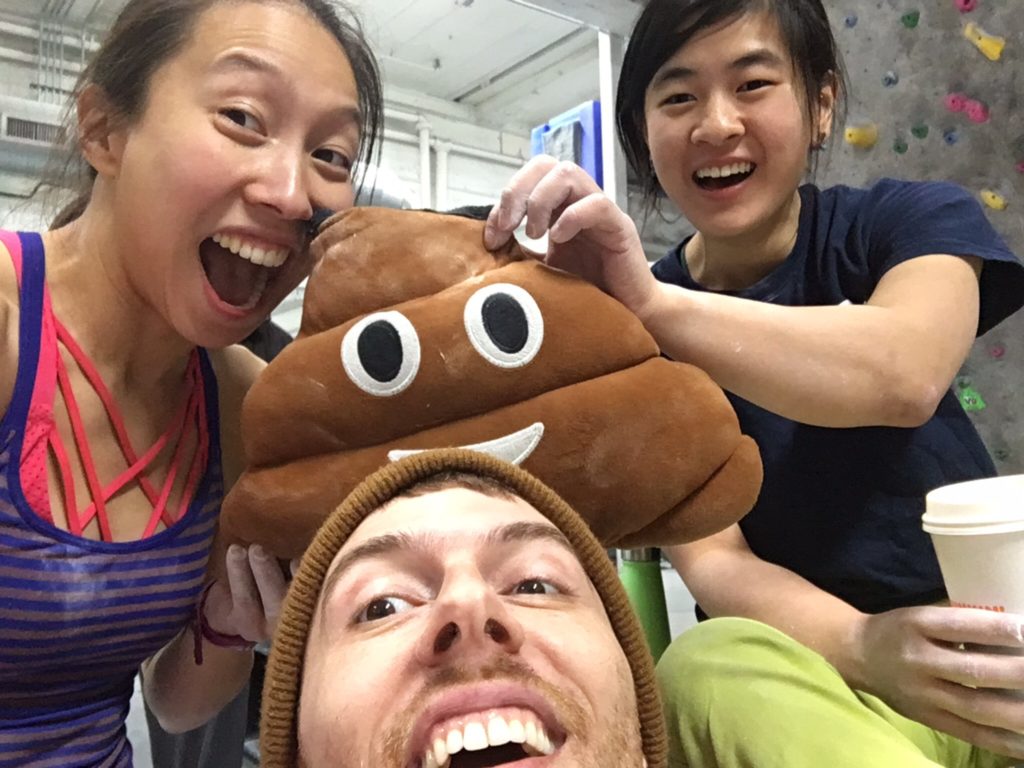 We went on a climbing trip to Squamish just the two of us and I realize she is one of the few people in the world I can spend more than 48 hours with and don’t want to murder them.  Which for me, is a huge deal.  I usually get sick of someone pretty quickly and want my independence.  Not with Ju.  We climbed until our fingers bled and our bodies covered with unsightly bruises.  We took a trip to Vancouver and got massages and of course ate ramen noodles.  I introduced her to The Bachelor as she lives under a rock and don’t know about pop culture.   When we got back from Squamish, we bought cars and named them Xena and Xenu (I bought first, she copied me).  We got matching sleeping bags for our future climbing trips together (she bought first, I copied). We created a comical YouTube Channel called “SAG Climbing Beta”, aka Short Asian Girl Climbing Beta.

Ju pushed me to be a better climber, not just because she had a different style and good beta for me to use, but also in different climbing temperaments.  Unlike my high strung personality, Ju was “chill AF” and pretty much never got worked up over sending anything.   If she didn’t send, she didn’t send and moved on.  She almost never projects anything.  I, on the other hand, dream about the same problem over and over again until I get it.  Her relaxed climbing temperament really help me put things in perspective when I get frustrated.  After all, it’s just a bunch of rocks. 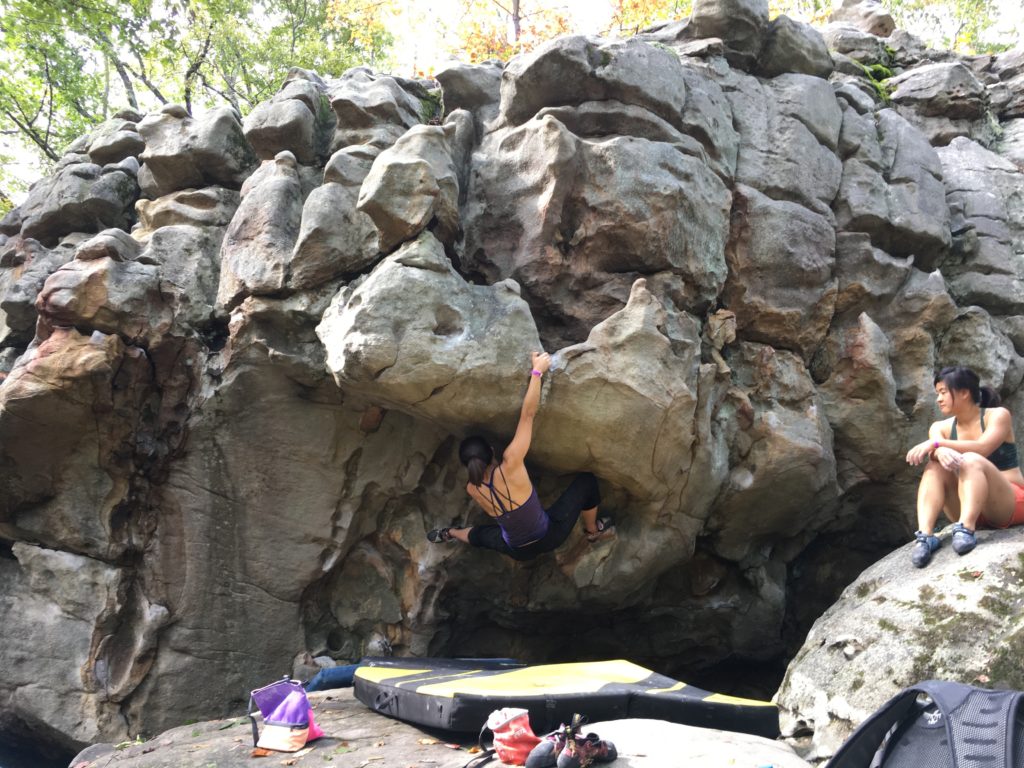 Somehow, without trying, I got my own climbing partner without ever being on a rope. The irony is that while I avoided rope climbing to intentionally be alone, it only lead me to someone I never thought I would find.  More than a climbing partner, more than a noodle-eating friend, more than a Beta Sister, but with Ju, I found the sister I’ve always wanted. 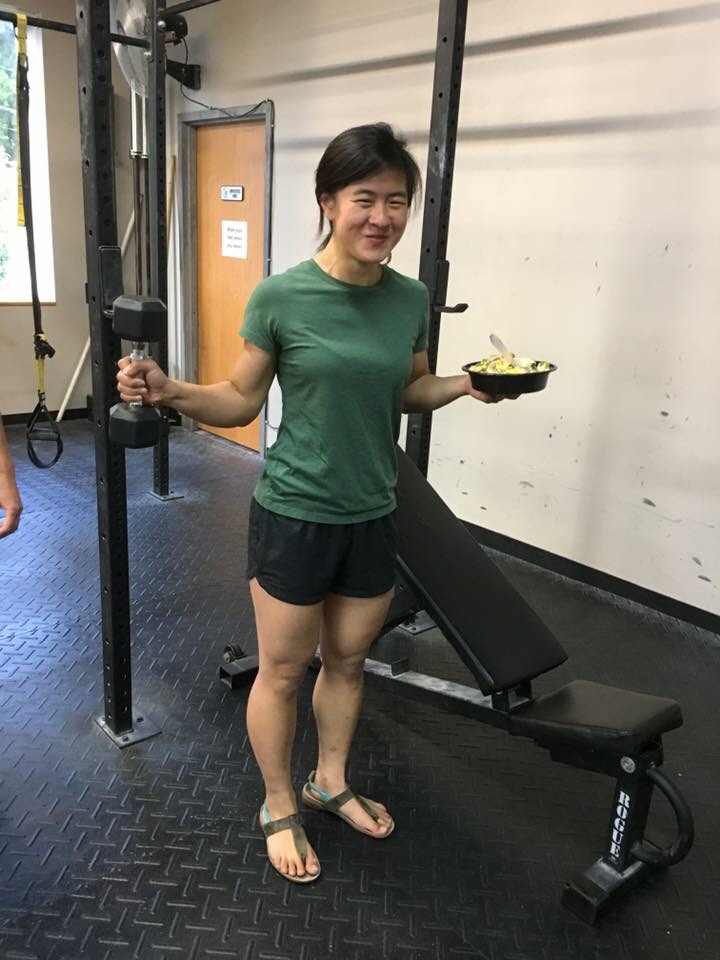 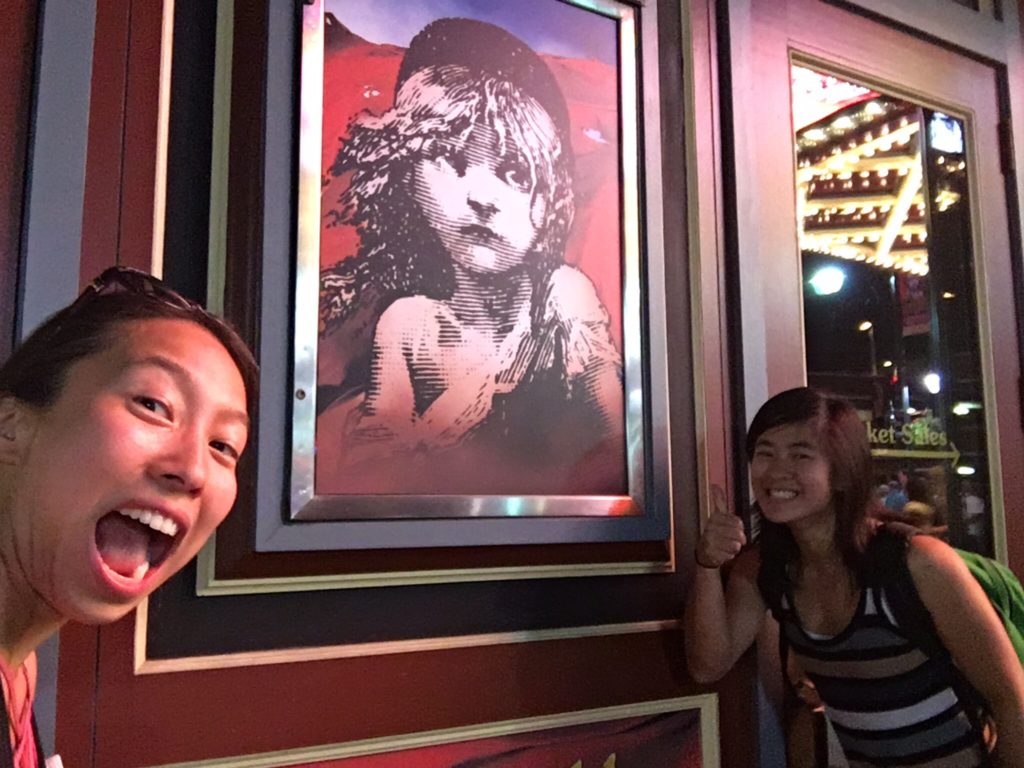 Stories like the relationship of Helen & Ju are unique in the general sense but within our own climbing communities are not that uncommon. The bonds created between climbing partners is strong in nature due to the vast amount of time you often spend with each other.  This is often due to the severity of trust you need to develop with one another. As Helen mentioned “I had someone’s life in my hands and they had my life in theirs”. This bond created between a solid partner becomes life long and for many goes well beyond just the realm of climbing.