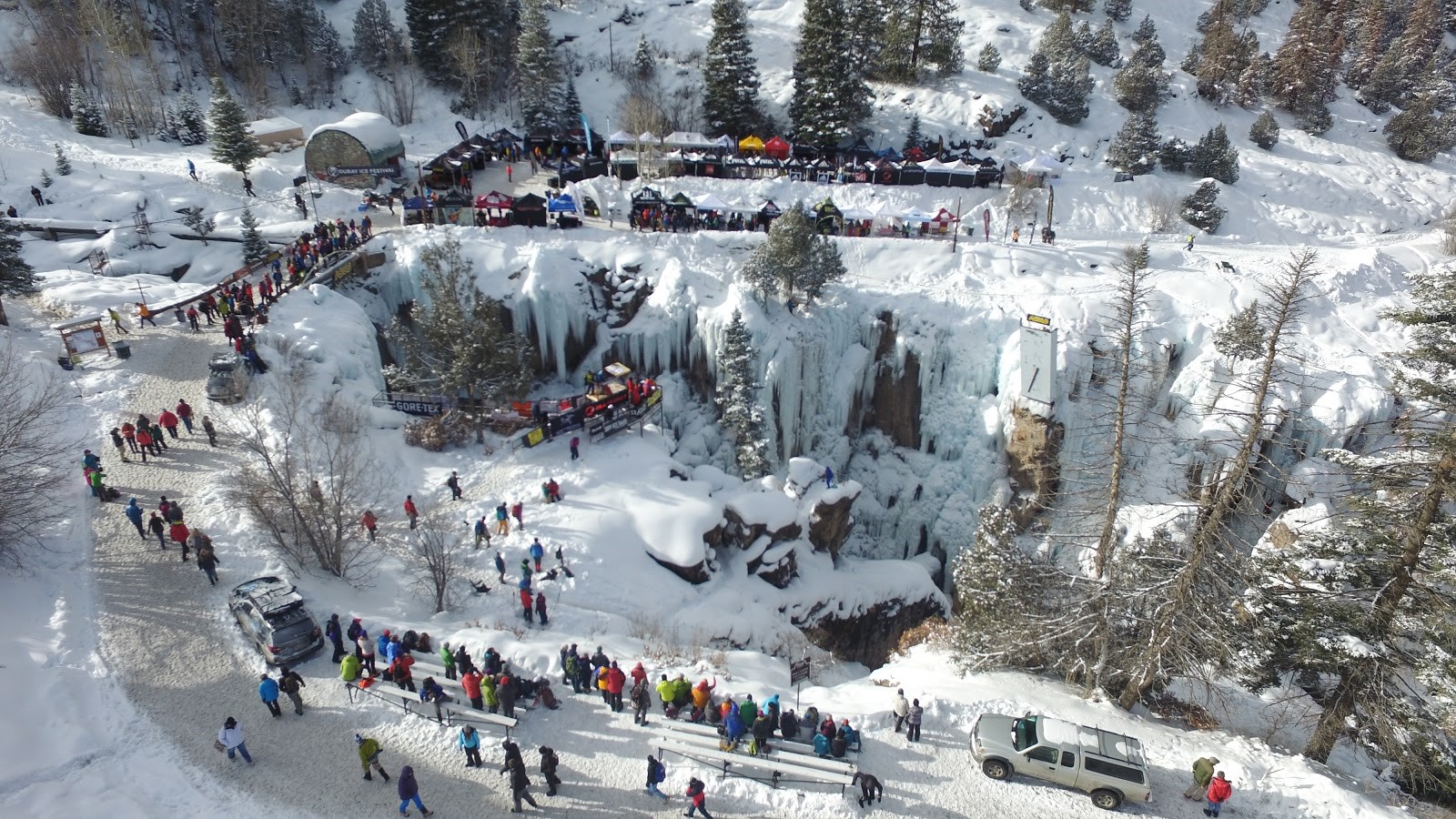 The 2019-20 Ice season can’t get here fast enough.  To help get you inspired, get your tick list started, and remind you to get your ass into the gym to train with DRY ICE Tools, we’ve asked Ben Carlson, co-owner of Furnace Industries, to curate a series of articles outlining just a few of the adventures out there just awaiting the kiss of your sweet blue steel picks. Stay tuned in the coming months for more ice destinations.

Ouray (pron: YER-Ray) is a sleepy former mining town located in the San Juan Mountains of southwest Colorado. Ouray is also home to the biggest, bestest, and baddest Ice Climbing Festival on planet earth. This is largely due to the Ouray Ice Park, a climbing-community-supported mile long gorge with over “200 named ice and mixed climbs, most within a 15-minute walk of the Park entrance.” And because climbing companies, including Furnace Industries, recognize that this is a precious non-profit resource worthy of corporate support, the climbing here is FREE.

While a climber could easily spend days if not weeks just climbing within just the Ice Park, here are four big Color-RAD-o routes to get you salivating for the freedom of the hills:

Without a doubt, one of the best routes I’ve ever climbed.  Colorado’s longest free-falling waterfall, Bridalveil Falls in Telluride (there’s one in every county it seems) is far and away one of the most enticing ice climbs anywhere in the Lower 48.  Although not visible from Main St in Telluride, the route is difficult to overlook simply due to its gravitational pull. When Bridalveil is in, it’s spoken about in hushed tones at the Ouray Brewery and Red Mountain Brewery lest someone overhear you mention it’s in and scoop the route from you. Bridalveil is like a siren song at the end of the box canyon, calling worthy climbers to take up the challenge…

The first attempt my Colorado ice partner Lynn McGrew and I made on Bridalveil ended in snowy failure.  We started our approach from Ouray in a mega snowstorm that only worsened by the time we parked at Pandora (the historic mine and the reason Telluride even exists, near the base of the route).  After 20 mins we turned back due to the roar of unseen but obvious evidence of avalanches crashing down across the approach route through the maelstrom from Ajax Peak to the east.

We bailed back the FJ, and sought out a lesser life-threatening objective, Cornet Falls WI4-5, which, after a super casual approach from downtown Telluride, we found was not in. Sometimes you just take the tools for a walk.

Couple days later, stars aligned. Weather was steely bluebird perfect.  Snowpack had (somewhat) settled. I even didn’t drink whiskey the night before. Mmm, conditions were perfect, it was business time.

Parked at Pandora long before the sun rose, we were ¾ up the access road, (yes, there’s a ROAD to the base of this route and you can drive up in the right conditions) before the next party arrived at the trailhead.  But they were on skis, and were were lamely postholing our way up knee-deep crusty snow.

We put the hammer down and boogied / swam / groveled in the deep snow up to the base of the route. I was halfway up P1 before the other party arrived.

Enormous, scary, steep, and beautiful, the route is not as hard as it looks, or it can be crazy hard depending on the line you take.  Like most things though, if you can get out of your own way, clarity is easier to come by, less complicated. Breathing deep and calming my own nerves, I saw a weakness in the overhangs, and our ascent weaved and bobbed around many of the most ridiculously overhanging features.

Thundering water pounded from behind the route.  At the first belay, Lynn, an accomplished climber and collector of words of the wise, expressed her concern that “perhaps this route was above our heads”.  What she was referring to was the idea of climbing the insane 50’ dagger of ice hanging directly above the belay (right side of the upper tier in the pic above).  After some tea and a snack, I assured her that I too agreed that climbing straight up would be exceedingly challenging, and that the actual plan was to traverse left from the belay to steep but more featured ice.  All was right with the world. I was reminded that communication is important, your partner cannot read your mind.

And oh what a route!  Rarely have I been on an ice climb south of the Canadian border with such amazingly satisfying and airy exposure…

I hesitate to expose anything about this route.  The three or four pitch, avalanche-threatened Whorehouse Hoses is already one of the most popular routes in Colorado, and as such, lines form, toes get cold, people get impatient, then tempers flare tarnishing the experience. If you can get it with no one else around, you’ll be rewarded with one of the finest moderate outings in CO.

On our ascent in 2018 my co-rep at the Ice Fest Nick Hernandez [choose your handle] and I arrived at the base of the route to find 8 (8!) people waiting to get on the route.  Two guided parties and two indy parties awaited their turn on the main, picked out / kicked out, and clearly easier left side of the falls. Nick and I had a choice: queue up, or tackle the unrelentingly steep right side of the flow.  We chose steep.

220’ of rope stretching / quasi-simul WI5+ climbing later, I arrived at the fixed anchor to meet a San Juan Mtn Guide who was bringing up his two clients (that made 11 folks on the left side if you’re keeping count). Nick followed, albeit slowly while the guide and I chatted about how route sharing on ice is only possible if everyone is cool and mindful.  When Nick eventually came into view, he had his gigantic digital SLR dangling and swinging about off the back of his harness like an anchor on a tall ship in the North Atlantic. Sweating and pumped, Nick revealed that this was his first multi-pitch ice route and that he had planned to take some pics mid way up! 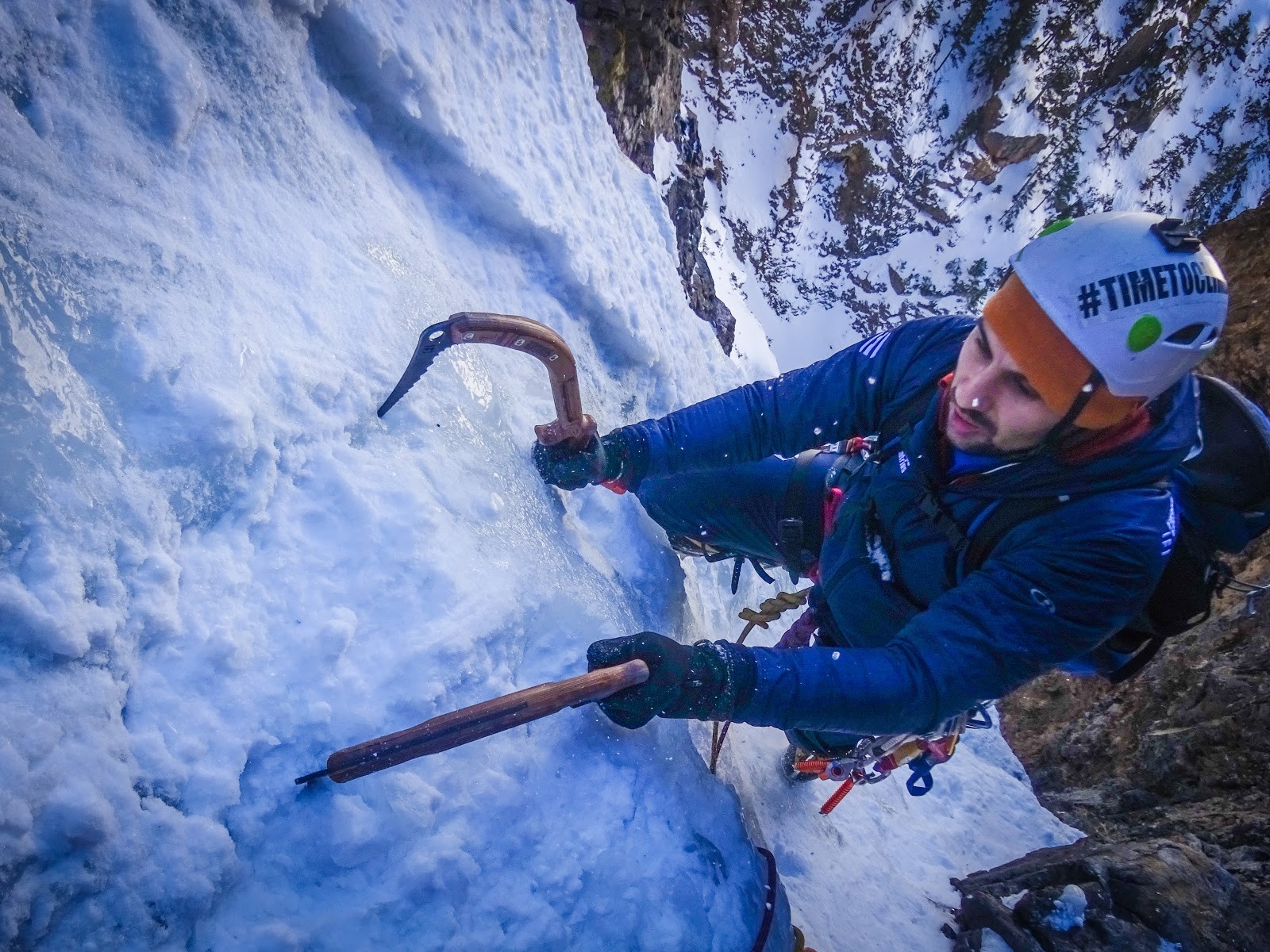 Oh lordy! The Ames Ice Hose is a not-to-be-missed route and is a requirement on the resume of every serious ice climber who dares call themselves one.

Popular, long, and breathtakingly scenic, the route climbs up the Ames Wall after a steep approach from the train tracks. It feels like it begins waaay up. The moment you step off the ground you are already quite high above the valley sprinkling in some alpine feel.

While to bottom pitch has formed well in the past few years, it’s possible that it won’t and some mixed climbing is required to access the ice. But the second and third pitches really make this route stand out. Long, sustained, and pretty spot on WI4-5ish for most of the way.

Better have your act together for the final pitch.  It’s long and, well, looong… It’s a calf shredding, grip strength testing, enduro climbathon that keeps you on your toes.  As a special gift it’s also usually wet. But you’ve been training hard with DRY ICE Tools, so you’re ready right?

Furnace Industries Co-Owner George Fisher and I tackled this eponymous route on our first year as sponsors at the Ouray Ice Festival in 2014.  Since the route jogs to the right for the third pitch, it’s possible, though staunchly unadvised, to begin climbing once the party above has cleared the 2nd pitch. At the second belay we caught up to the party of three ahead of us where we met Maury Birdwell who had a massive gash on his chin from some falling ice.  Heard it took 8 stitches…

Camp Bird Road near Ouray is host to several easily accessed and therefore popular climbs. Skylight is one of the most popular and this may be because it’s just the most fun!

My buddy Dirk Peters and I tagged this route in 2016 before the Ice Fest.  Skylight climbs ice inside a deep cleft, and when you reach the ice in the back, the confines make for difficult tool swings and getting good placements becomes quite challenging.  Hooking and vigilant footwork become paramount and creativity is the name of the game. Squirm, wiggle, and stem. When we did it I had good ice screws for pro all the way. Squeezing out of the top of the provides a unique ‘come-to-the-light’ experience.

Don’t forget to stop and appreciate the flora: 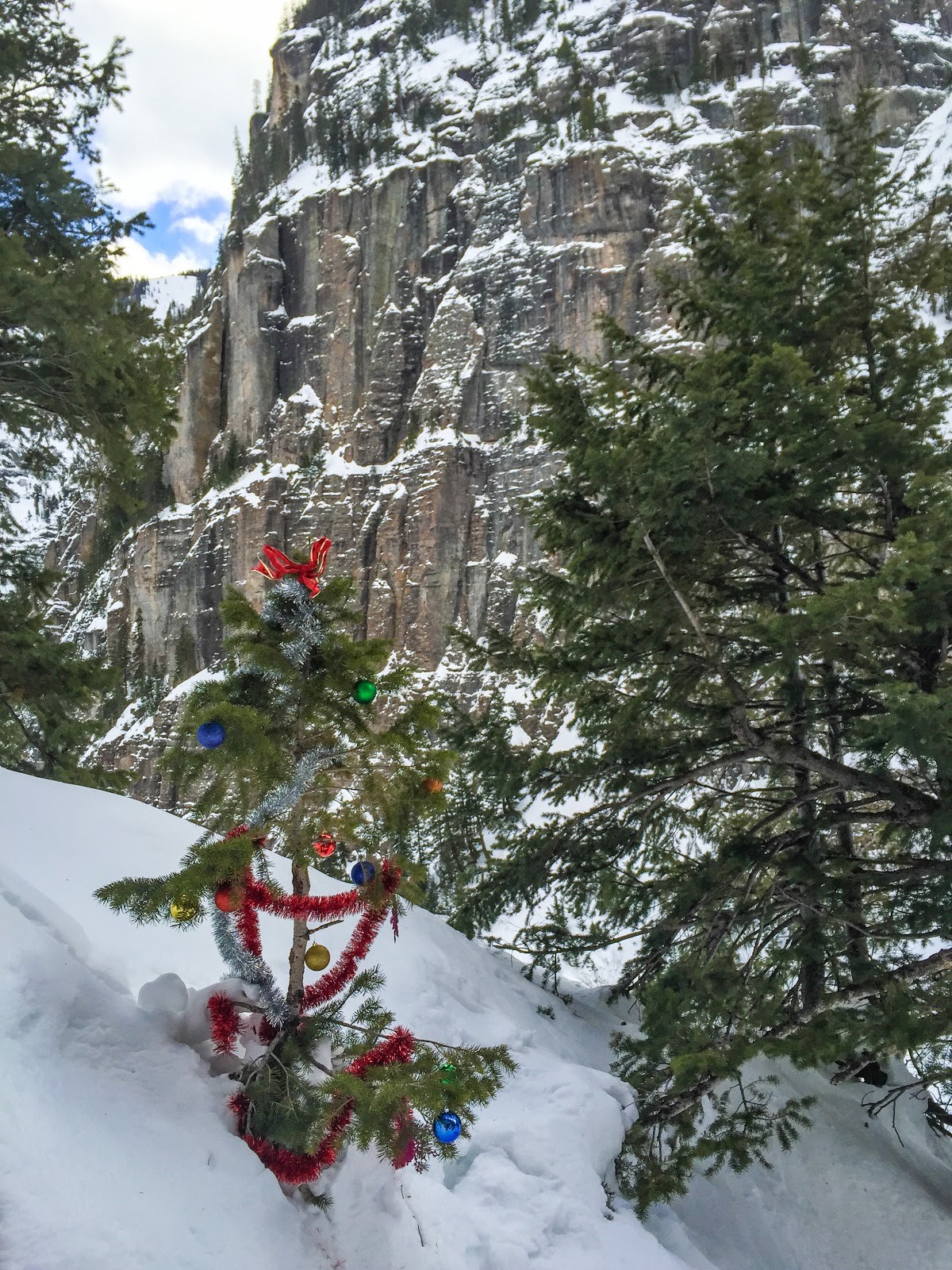 Ultra Beta: Soothe your sore body at underground hot springs at the Weisbaden Hotel , the clothing optional Orvis Hot Springs, or make friends at Red Mountain Brewing or the Ouray Brewery and gently ask for directions to wild outdoor hidden hot springs that only locals know about…

Get psyched. Get strong.  And remember, #ItsAlwaysIceSeason with DRY ICE Tools.

Time to Climb pays it’s bills through sponsorships, serving ads and affiliate program earnings. If you enjoy and/or benefit from content on our site please patron the businesses who support our efforts and sharing our articles. Thank you for your continued support!