The 2019-20 Ice season can’t get here fast enough.  To help get you inspired, get your tick list started, and remind you to get your ass into the gym to train with DRY ICE Tools, we’ve asked Ben Carlson, co-owner of Furnace Industries, to curate a series of articles outlining just a few of the adventures out there around the country just awaiting the kiss of your sweet blue steel picks. Check out these Northeast ice climbing gems of New Hampshire!

At some point in your ice climbing career, you must go/will go climb ice in the granite state of New Hampshire.  Home to a unique population of rugged and somewhat insular climbers, the routes are tough, cold, scrappy, and amazing.  The mountains are constantly underestimated by non-New Hampshire-ites. To date, 162 people have died in the Presidential Range from causes like falls, avalanches, hypothermia, hit by falling ice, even a fall into a crevasse (yes, a crevasse).  Northeast ice climbers tend to learn a deep understanding and respect for mountain weather systems. Climbing in these conditions can make or break your enthusiasm for winter climbing. 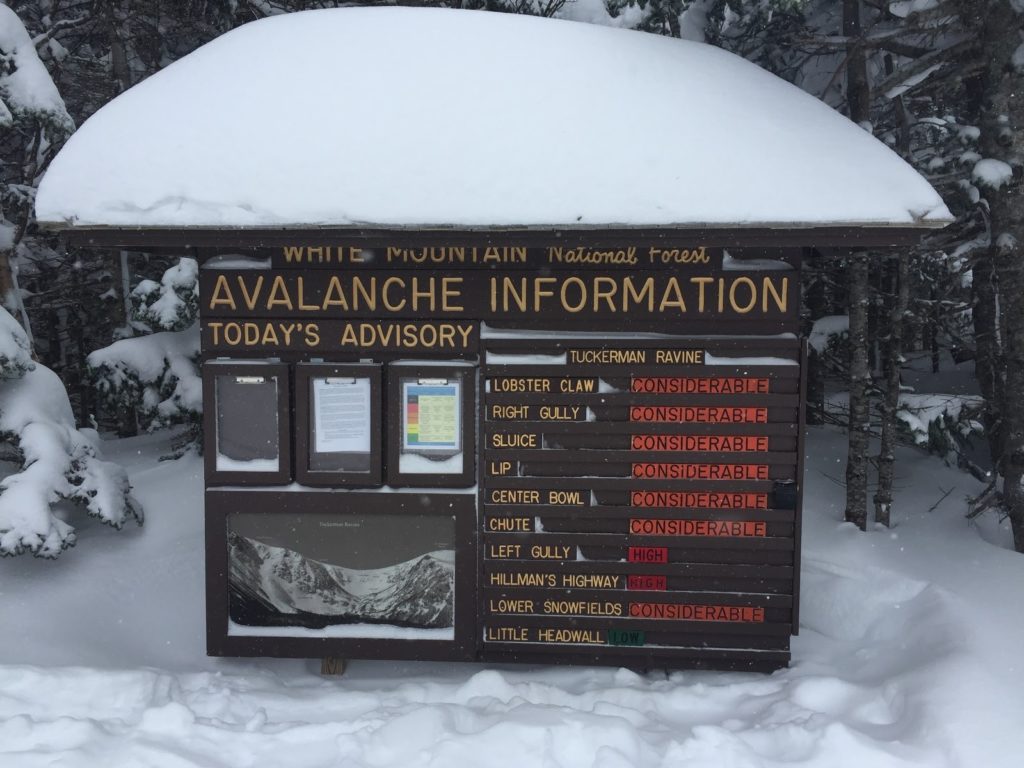 The Black Dike has long been the Northeast ice climbing testing ground for aspiring winter climbers.  It’s a big, scary, historic, and dangerous route where more than a few accidents have occurred.  When you’re suffering at the first belay with your featherweight techy gear, high performance clothing, and lovingly lightweight insulated boots, while dodging spontaneously falling ice, and you feel the cries for mommy hit your lips as you step left to the rock traverse, just remember that the Black Dike’s First Ascent was solo, by John Bouchard, in 1971 (when bent-shafted tools weren’t even a glimmer in anyone’s eye for another 10 years!)
The Black Dike 5.6 WI4-5 M3

DO NOT under ANY circumstances climb under another party. This is not ‘sunny day cragging’ at Rumney. It seems silly to have to say this about an ice climb, but there is a lot of new blood heading into the jaws of these climbs, and you need to know that the risk is not worth it, you WILL get clocked by BIG falling ice.  Wait for your turn!

The first time I climbed this route in January 2008 with my late friend Holly Mauro, the Northeast ice climbing season was just barely scraping along and many of the bigger routes were not in the best shape, and neither was the Dike. One day after a massive rainstorm followed by plunging temps, we headed up the boulder field to the base of the dark granite gash in Canon Cliff hoping that all the new water would make for a fat cruiser route. This first pitch went well, tools bottoming out only occasionally.  After somehow managing to claw my way across the rock traverse, I thought I was home free, but the lack of ice on the rest of the route gave me very serious pause. If there is a window to hell from this terrestrial world, it’s located somewhere on the Black Dike.

Every ledge and every surface had a ¼” of verglas on it making for insecure crampon placements and non-existent pick placements. I holstered one of my (then leashed) Charlet Moser Quasars and one-gloved-hand-rock climbed / single-tool-dry-tooled on slippery, angled rock for most of the second pitch, stemming and gastoning on icy sidepulls. Mixed climbing was new to me and my heavy Petzl M10s, and I wished I’d had a way to  train for it beforehand.  The route may actually have been easier if there was LESS ice on it.  I placed my entire rock rack on that pitch while tasting metallic adrenaline in my tongue, quivering with every move, and not one ice screw placement.  Holly followed, merrily smiling and signing songs, cheerfully pulling my gear like this polytheistic hell was instead a most welcoming embrace…

There is so much written about Repentance, and yet, so little, perhaps in keeping with New England’s traditional laconicism.  Take this description from NEClimbs: “A classic New England runnel climb with an alpine ambience. Steep, unrelenting, with many complex and committing sections.” That’s it. Nothing more. Just some scant route beta…

Make no mistake, this is truly a legendary Northeast ice climbing route. The climbing is steep, continuously hard, often in cramped spaces, and is especially rewarding for climber’s who are precise with their placements. This climb is a true test piece, pushing the strength and technical skills of most climbers to their unsuspected limits. In a good year, it’s slightly more casual. These days, half of the protection will be rock gear, and the chockstone finish at the top of P3 will leave you positively giddy and gasping for breath.

Repentance was first climbed in 1973 (1973!) by John Bragg and Rick Wilcox. As Bragg told Wilcox of the plan for the day on the route’s first ascent, Wilcox said, “Repentance? That’s a rock climb”  To which Bragg replied, “Not today it isn’t…”

From Majka Burkhart / Rock & Ice:  Repentance went in four pitches using Chouinard Zeros, with North Wall hammers as third tools. It didn’t take long for other climbers to recognize the quality of the line. Yvon Chouinard and Henry Barber claimed the route’s third ascent, a feat nearly three decades ahead of its time—they did it without leashes.

Repentance had been on my list since I first learned ice climbing was a thing over 20 years ago.  My only time up this route, to date, was a lean year. Derek Castonguay, my west coast climbing partner, was home visiting his parents in Maine.  We met up early at Frontside Coffee Roasters after the 2015 Mount Washington Valley Ice Festival where I was repping FI’s DRY ICE Tools as a sponsor. I let Derek in on the plan, his eyes narrowed slightly over the ghostly steam wisping up from his coffee. After a pause, he asked “You sure about this?”. Yes. Yes I was. No more waiting. This was the year.

Approaching the base of Repentance, we expected there to be another party on this popular route, but praise be to Chouinard, we had it all to ourselves.  The route was as beaten and bashed from weekend gangroping as a shattered Black Mirror title slate. Leaving the first belay, the P2 crux was very hard, very committing, and lacked any decent ice for protection. Picture trying to place a screw in a crystal dining room chandelier. A few crampons sparks on speckled granite followed some desperate, overhanging ice toolery, I then entered the meat grinder.  Some years this pitch is fat with ice and it climbs like 4-. Not this year. The ice was so far recessed into the crack I’m pretty sure I voided any warranty on my Patagonia climbing pants. Not really ice climbing and not really rock climbing, chimneying with crampons probably shouldn’t be a thing, but in mixed climbing, anything goes. Fortunately there was a good crack to the left of the chimney that ate up cams.

Derek Castonguay crushing P2 of Repentance WI5 on Cathedral Ledge in NH with a pair of KRONOS.

If you can handle watching, in 2011 Steve House soloed this route and the route next door in one swift and inspired jedi mind trick :

Way in the Wilderness WI5

I led this climb in 2009 during the Mount Washington Valley Ice Festival when my partner Mike MacElhiney and I were also training for our May trip to the Ruth Gorge in Alaska.  We geared up with more gear than was reasonable (training weight) and skied in from the Covered Bridge Campground on the Kancamagus Highway. Skinning and crunching, weaving and sweating our way up through the trees, the streaked headwall loomed larger and larger overhead as it slowly announced itself from the dense birch forest.

This climb forms in a tall, narrow cleft in the south-facing Painted Wall cliff band, which means there needs to be a long stretch of sustained cold for the route to come into shape. Once you reach the bottom of the route, try to keep the butterflies from making you gag at the steepness.  The route is flanked by an overhanging rock wall on the left and hairy hanging daggers on the right like tiny twisted Tolkien-esque icicles frozen into gravity defying angles due to freezing in the wind.

Take care as you approach the bottom of this route.  If the sun is out, it warms the rock causing less bonded ice to spontaneously fall.  Take a close look and make certain you are up for the challenge of climbing the crux free-standing pillar ¾ up the beast.  Although it’s possible to break the climb into two pitches, climbing this in one long pitch makes it one of the best, if not the best, single pitch outings in the East. Forearms ablaze, turn the final overhang as the anchors come into sight, try not to dry heave as you stick the turf to the top!

There are countless Northeast ice climbing routes to be had with easily many, many more excellent routes in NH, and maybe some yet to be discovered. The storied Pinnacle Gully, everyman’s Standard Route, intimidating Dropline, lonely Green Chasm, and the crowd pleasing Dracula…  Lest we forget, the elder statesman Omega, a severe outing, should be on every serious ice climber’s ticklist.

Get psyched. Get strong.  And remember, #ItsAlwaysIceSeason with DRY ICE Tools.

Time to Climb pays it’s bills through sponsorships, serving ads and affiliate program earnings. If you enjoy and/or benefit from content on our site please patron the businesses who support our efforts and sharing our articles. Thank you for your continued support!