Imagine spring time in the White Mountains: the air is cold and damp, the night sky is clear and crisp, there’s rain, sleet, snow and fog all in one day, and there’s still several feet of snow between your Microspikes and the rocky trail below. Heading up to the Hermit Lake shelter in late April, you can expect all of those things, and you most certainly can expect the large groups of adrenaline-junky skiers and boarders trekking up the Tuckerman Ravine Trail. Some have their skis strapped to packs, and some just ski all the way up to Hermit Lake. Most are completing the three-mile hike in their ski boots. Snow packed three feet thick from the trail head hints at why all of these people have come here – the exhilarating chance to ski one of the most legendary springtime spots.

Arriving in the bowl of the Tuckerman Ravine on a blue bird spring day is like walking into an arena.  This stately glacial cirque looks dizzying up close, and the bowl shaped geography boasts feet upon feet of glorious snowdrift.  Crowds of people are looking on from the rocks to the left and right of the routes down the ravine, and the cheers for each triumph and fall reverberate off the rocky outcroppings. There are several lines of people marching like ants to the top of the ledge. Once at the top, each skier is faced with deciding just how they want to handle the next few moments of their life, and watching the handful of brave souls jump the headwall gets one thinking about all those who came before and dared the same flight off the headwall.

The first man to ski the mountain was a German named Dr. Wiscott. He made his descent in 1899, several decades before Tuckerman Ravine would become popular for skiing.

Fred Harris was the first man to ascend the mountain on skis. In 1909, he spearheaded the formation of the Dartmouth Outing Club, a group which would be integral in the rise to notoriety for Tuckerman Ravine. In 1913, he made his ascent via the carriage road. Just one year later in 1914, another man by the name of John S. Apperson of Schenectady would make the second recorded descent of Tuckerman Ravine. Apperson was an avid skiing mountaineer who made some of the early ski ascents of several mountains in New England, including  Killington Peak in Vermont and Mt Greylock in Massachusetts. Over the next few decades, skiers from Dartmouth and Harvard would be the most prominent patrons of the ravine.

The presence of mountaineers and adventurers in the White Mountains was growing as the 1920’s rolled around. Joe Dodge, appointed hut master of the Pinkham Notch hut in 1922, did much to improve accessibility to the area. He was an industrious hut master who worked tirelessly to make improvements to the site. Dodge also played an integral role in blazing trails through the back country of the White Mountains and setting up various AMC hut locations that remain today. Dodge, along with ski racing pioneer Albert Sise, were some of the more prominent skiers in the ravine throughout the 1920’s.

When the next decade arrived, skiing in the Ravine would become a completely different animal; it wouldn’t just be a few outing club members or dedicated back country skiers – the Ravine would host stunning and thrilling events.

April 11, 1931 was the day that skis first soared over the headwall. John Carlton and Charley Proctor took a successful run down Right Gully in the Ravine. They both decided to go for the headwall drop, and both men succeeded. Soon after on April 19, 1931, a group from Harvard were the first to ski from the summit of Washington over the headwall of the ravine. Dartmouth skiers would also continue to explore the region, completing some of the first runs on the other routes down Tuckerman Ravine such as Left Gully and the Chute, and some of the routes directly down the center of the bowl. 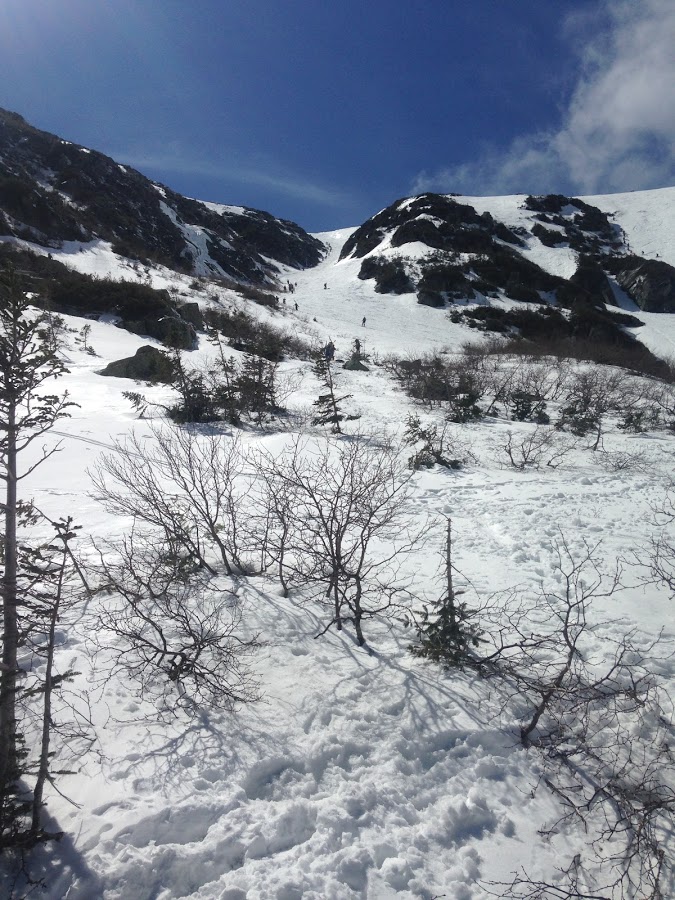 In 1933 the Civilian Conservation Corps began cutting downhill ski trails in the region, one of the first being the Richard Taft racing trail on Canon Mountain. The CCC hired Charley Proctor, one of the first to over the headwall, to assist in creating the trails around Pinkham and Crawford Notch areas. John Carleton, Proctors headwall-jumping partner, was also a fundamental game-changer for the area, as he helped develop many ski trails with the CCC throughout New Hampshire. From this blooming interest in the creation of ski trails, the John Sherburne Trail was born. It went from the floor of Tuckerman Ravine to where the Pinkham Notch Visitors center sit today. Along with this route, a hut was built by Hermit Lake to warm up chilly skiers.

Throughout the 30’s Tuckerman Ravine became increasingly popular. Skiing became more available as new tech in the industry allowed for better access to the sport. With much of the country struggling economically, this kind of skiing became an inexpensive and exciting new adventure. Skiing became widely accessible, and the nearby towns saw economic benefit in hosting the influx of thrill seekers.

The Ravine, now sought after for being an excellent place to test one’s mettle, started playing host to racing events. Some of the first held there were Harvard and Dartmouth slalom races, giant slalom races, and even Olympic tryouts. The most legendary of these events was, by far, the American Inferno races.

There’s no surprise a race like the American Infernos was born from such an epic landscape.  Throughout the 1930’s, three American Inferno races were held. Easily the most notorious of events held in the history of the Ravine, the Infernos were suggested by the Hochgebrige club; a group that was formed by the Harvard skiers who had gone from summit to headwall in 1931. They proposed a race from the summit of Washington all the way to the Pinkham Notch hut at the base of the mountain. The first race was held on April 16, 1933. The racers would have to navigate the ravine on their way down, and ski the hiking trail all the way to the end. Hollis Phillips was the winner of the first American Inferno, completing the course in 14:41.3. The next Inferno was in 1934, and this time the racers were expected to go over the headwall during their descent. Most of the participants had never skied over the headwall, including the winner of the race, Dick Durrance, who beat the previous year’s record by completing the course in 12:35.0.

The final American Inferno race was held in 1939. 42 participants hiked to the summit of Mt. Washington, where they were met with extremely cold and windy weather. Despite hesitations, the race was not put off. Dick Durrance, the former Inferno winner, was slated to go 3rd, when he had to make a change last minute to his set-up. Waiting in the wings, Matt was bumped up to take his starting spot, and he began his race instead. Matt had a plan as he soared down from the summit and approached the lip of the ravine; he would make three turns on the steepest part, which was just about 50 degrees, and then head on down. This however, is not what happened at all, as Toni Matt recalled many years later:

“I figured maybe making three turns and then running straight. I did make three nice turns…. I went right and then left and right and then said, well, now is the time to straighten them out.  So I did and I kept waiting.  Finally I dropped over the Lip….”

He flew straight over the headwall and down the steepest part of the ravine, going on to soar over the little headwall just beyond the ravine floor. This is where he connected to the Sherburne trail and made his iconic run in a mere 6:29.2. Matt had successfully halved the time of the previous Inferno, his run forever crystalized in the canon of skiing in Tuckerman Ravine.

The events at Tuckerman Ravine in the beginning of the 20th century helped to shape back country and extreme skiing as a sport. Throughout the 1940’s Brooks Dodge, the son of Joe Dodge, furthered this development by creating new ski techniques which allowed for more control and precision on the extreme terrain in the Ravine.

Throughout the 1960’s and 70’s, Tuckerman Ravine grew into the exciting and lively spring ski destination that it is today. Weekend warriors of the time would hit the slopes and ice climb in the ravine, camping and enjoying some revelry at the Hermit Lake shelters.

If you find yourself heading up the Tuckerman Ravine trail on balmy spring day in April, head to the floor of the bowl. There you’ll most likely find a scene that has persisted for a century – pairs of skis strapped to the backs of people boot packing up the ravine, and the howls and cheers of the crowd as another thrill seeker shoots down the middle of the bowl, not even thinking of making a turn.

For more information on Tuckerman Ravine –

Ski or Ride the Ravine