THANK YOU FOR YOU PURCHASE!  I was sitting on the submit order page for almost five minutes before I worked up the guts to actually buy the ticket. I already quit my job so I kind of had no choice but to do it now!

I grew up in New Jersey. I went to college in Massachusetts and up until this point, I’d never left. I had been working in the real world for 2 years and was feeling like I needed a big change. Hawaii is pretty drastic. I’d actually never been to Hawaii and I’ve only been out of the country once when I was 8 years old.  Hawaii just sounded so damn cool. To be honest, I was tired of feeling limited to what I can and cannot do. Don’t get me wrong, I love my life. I lived in the same state I went to college in. I partied with my best friends every weekend and I had a very fulfilling job (Recreation Specialist for adults with disabilities.)  On top of that, I was only a 4-5 hour car ride from where I grew up (so I could easily get home if I wanted or needed to). There’s just something that rubbed me the wrong way about having over $100,000 in debt. Yes, six figures worth of student loan debt and it didn’t seem to be going away any time soon. what bothered me the most was that so many of my peers were going through the same thing. Instead of feeling defeated by my loans, I decided to completely flip it. I am capable of so much because I want to be.

It was late June of 2013 and all of the sudden Hawaii came into my head. Now that I think about it, Hawaii has been a recurring thought for quite some time. During my senior year of high school (2006), my wrestling coach asked me what my plans were going forward. I liked to say a lot of random stuff so I told him I might move to Hawaii. I don’t know what made me say that, but he responded as if it wasn’t a bad idea. He mentioned that his friend moved to Hawaii, bought a boat, and never came back. The idea sounded wildly awesome but I didn’t think much of it. When I graduated college (2011- Bridgewater State University), I randomly applied to for a travel agent job in Hawaii. I had a phone interview but I never followed up with them afterwards. I guess they never followed up with me either. I was just applying for the fun of it! While I was thinking about all of this, I saw a post online that said something like, that feeling you get when the summer ends, and you didn’t do half the things you said you were going to. That was the very moment I decided if Hawaii is considered paradise, then I want to live in paradise. 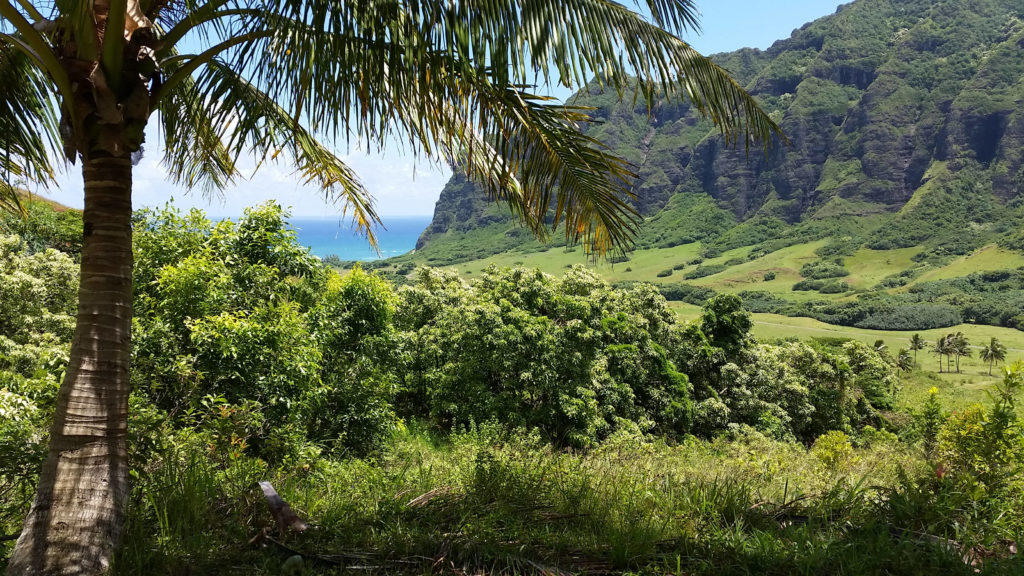 I have a friend who moved to Maui right after college and he seemed to love it.  I called him right away to ask for advice about the islands.  He was cool enough to give me a break down of a few of the main islands and I realized Oahu was the best option for me. Although, I’m not interested in living in the city, I like the idea that there is a city nearby.  In my opinion,  there will be way more job opportunities. After talking to my friend, I felt more confident than ever. Moving across the country to a remote island actually seemed pretty realistic.  Now it was time to take action.

My very next day of work, I sat down with my supervisor and told her I am resigning from my position.  When I got home from work, I gave my roommate/landlord my one month’s notice that I would be moving out by August 1st.  I called the debt collectors and found out that I can put my student loans on deferment for up to a year if I move to another state.  That would save me $1100 a month.  I put my car and TV up for sale on craigslist and cancelled my car insurance.  I then proceeded to tell absolutely everyone I knew that I was moving to Hawaii.  With all this hype, backing out was not an option.

I searched and applied for as many jobs as I could find in human services, recreation, and anything else I thought was interesting.  I used craigslist, jobs.com, and keyword searches on google. I checked government, city & county, and hotel/resort websites.  Then I finally came across the job I felt like I had to have.  I saw an ad on craigslist to be a ‘Kayak Tour Guide’ in Kailua, Hawaii. 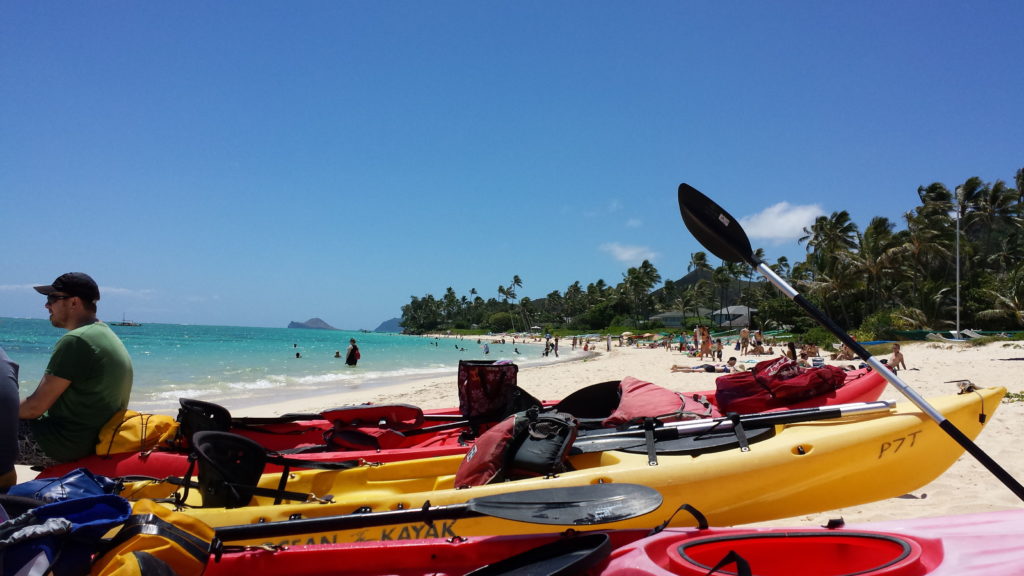 From my research and pictures I found online, the town of Kailua seems like an absolute dream!  I went from not knowing it would be like, to having a clear vision of exactly what I wanted to do and where I wanted to live.  I applied immediately and then called the very next day to follow up.  I had to keep calling back as the owner was always busy.  I finally got a hold of the owner and assured him that I was an excellent candidate for the position and I am 100% moving to Hawaii.   I even sent him a photo of my electronic confirmation that clearly states I purchased a one way ticket. 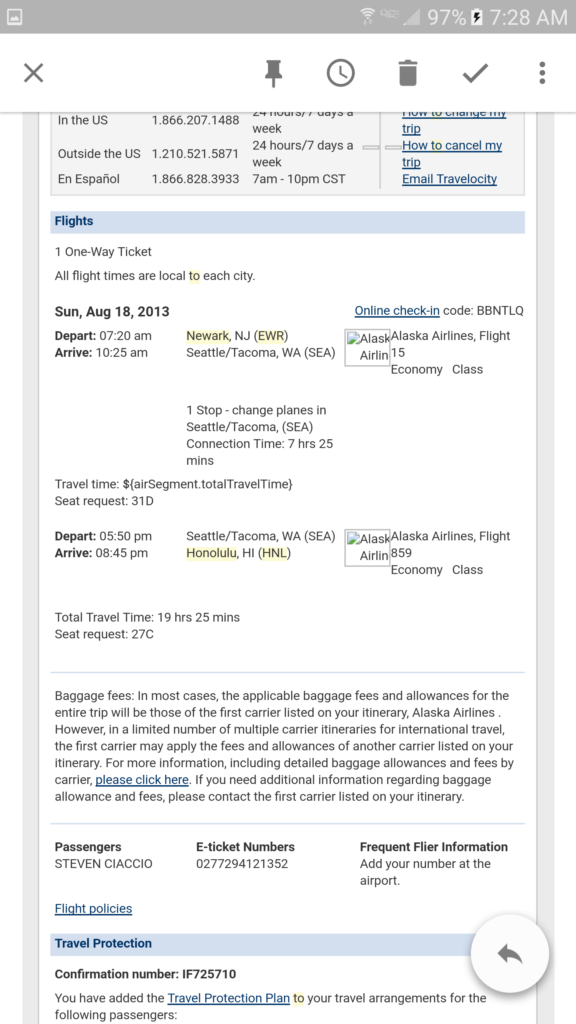 Things were starting to really come together.  The kayak job seemed to be a lock.  I ended up moving out of my apartment on August 7th and my roommate let me just prorate that extra week.  I went home to New Jersey for 10 days, partied and visited as many people as possible, and then I was off to Hawaii.   After about 45 days of preparation, it actually happened.  I stepped off the plane in Honolulu with 2 suitcases, a backpack, and less than $2000 to my name.  It gets even better.  A high school teammate of mine helped me out big time.  Coincidentally, my buddy Dave was stationed in Oahu with the military.  I reached out to him a couple weeks before I arrived and he said he would pick me up and give me a spot to crash until I get everything squared away.  He not only gave me a place to sleep.  He also let me borrow his car the next morning for my interview and apartment hunting.  Writing about this is just so crazy for me.  I am so grateful.  Everything always seems to work out if it is supposed to.  I definitely didn’t take any of it for granted.  I woke up before the sun even came up, had the most breath taking drive coming over the mountain from the west side to the east side of the island.  There are mountains all around me. The clouds here are just insane.  I finally made it to the town Kailua and wasted no time landing the job I wanted.  Turns out I am the person I say I am and the place I applied to is actually a real kayak business.  I then went from apartment to apartment until I found something that I can afford and make work.  Not even 24 hours on the island, and I solidified a job and a place to live.  I signed a short term lease for my own room in a 3 bedroom apartment in Kaneohe.  It is the neighboring town to Kailua and the apartment itself was only 3 miles from my new kayak job.  Less than week later, I was hanging out with Dave at his place and I found another incredible work opportunity.  I found an ad on craigslist to be an ‘ATV Tour Guide.’  I started giggling like a little kid at the idea of having such cool jobs.  I couldn’t even get a grip.  BOOM I got the job! 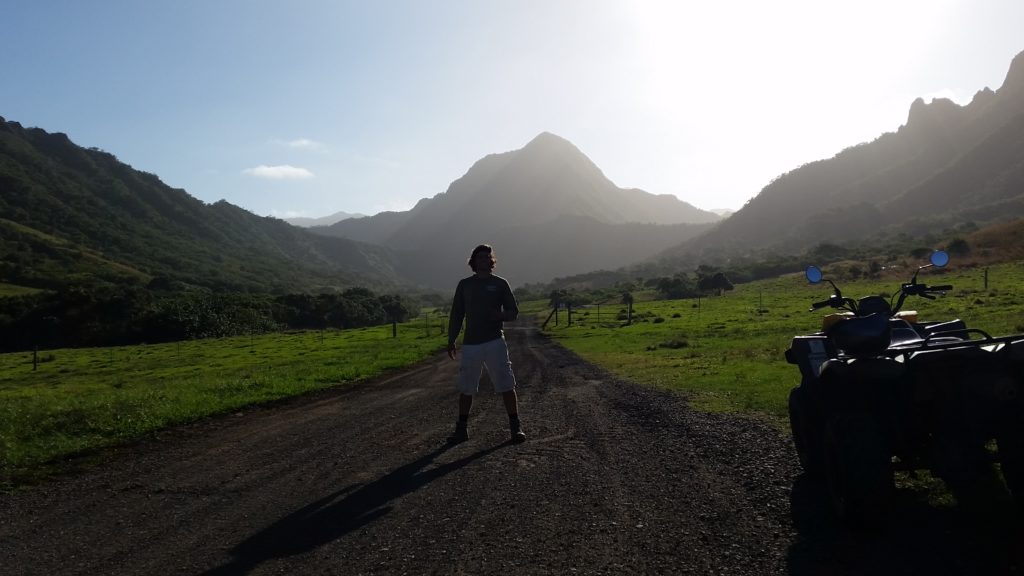 My time in Hawaii was like nothing else I ever experienced.  I was more active than I could ever imagine.  I kayaked all the time. 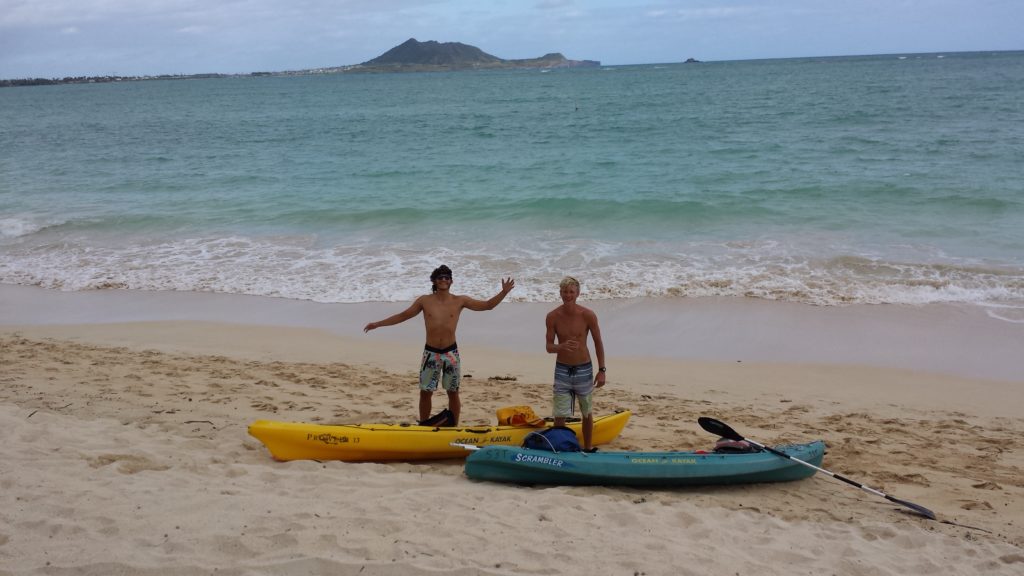 I became a hiking enthusiast, especially when the sun was rising or setting.  I got really into cycling. At the peak of it I was cycling 15-17 miles to work 3-5 times a week.  I started running marathons. I also worked 6-7 days a week.  Even when my loans kicked back in, I still made it all work.  My payments when up to $1050/month on my private loans and my parents helped me out with my federal loans by paying $250/month.  My rent eventually went down from $775/month when I first moved on the island to $675/month with everything included and I shared an awesome house with some incredible people.  I also only lived 2 blocks from the beach in Kailua.  I did not have to worry about car expenses because I didn’t have a car.  I road my bike everywhere or took public transportation.  Eventually, I got back into human services.  I would work with children with autism during the day, coach high school wrestling a couple times a week and lead ATV tours on the weekends.  I was always looking for creative ways to improve myself as an individual, have fun, and make extra cash. 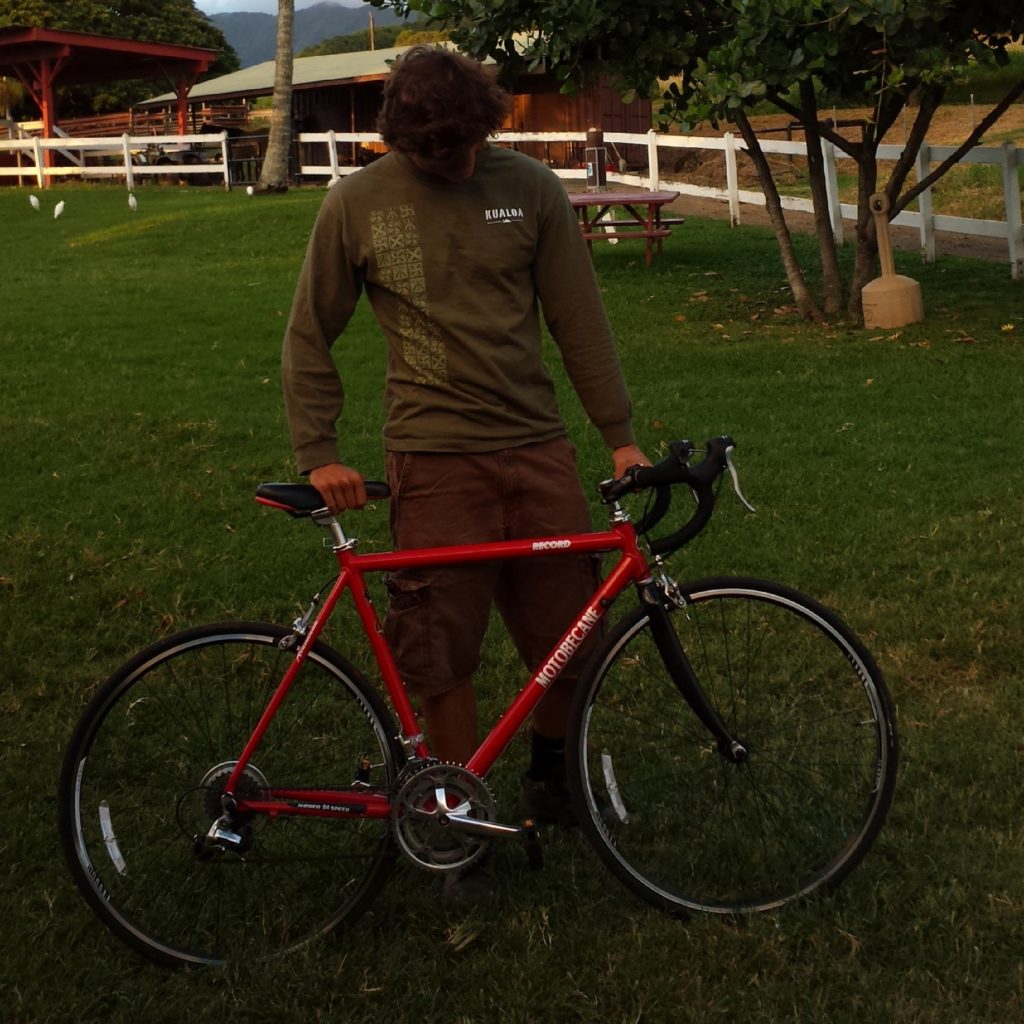 All in all, if it seems like a good idea, go for it.  After almost 2 years of living the island life, I decided I really wanted to see the world and travel.  Now, I am currently based in Chicago as a flight attendant and a Travel Photographer.  I have traveled to 8 different countries in the past year and a half.  I took a chance.  I put myself in the position to make it happen and now it is.  Opportunity is all around us. Have fun and live the life you always dreamed of!  The world has so much to offer and I just want to capture it and share it with everyone. 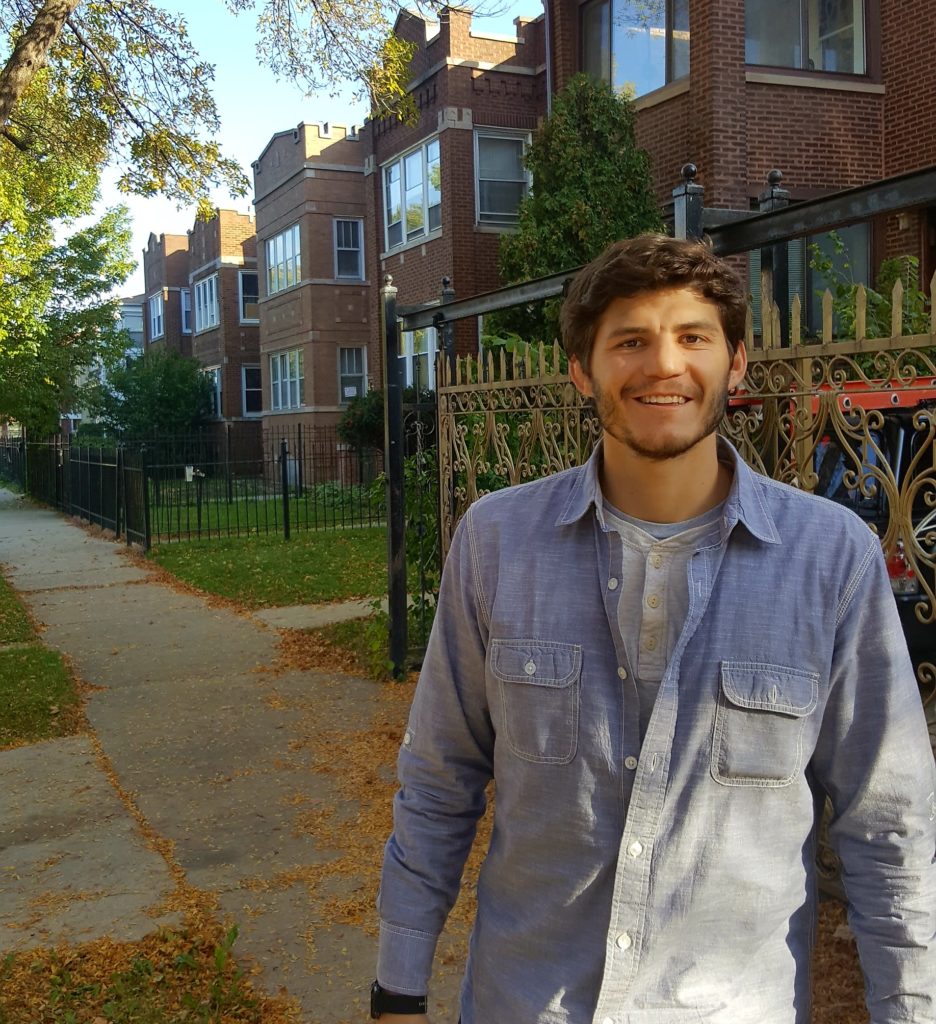 If you enjoyed my story and want to learn more about me and my adventures, don’t hesitate to check out my Instagram page @CaptureCoolness.  You can also view my work at Ciaccio Photography Shop

Looking to go Climbing in Paradise? 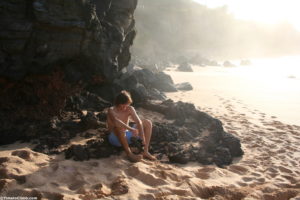 Bouldering in Hawaii: The North Shore of Oahu